A laser that tunes across the deep ultraviolet from 175 to 210 nm could suit applications such as spectroscopy and lithography.

Researchers in China have created a tunable all-solid-state laser that emits milliwatt power levels in the deep ultraviolet (DUV). Applications requiring light around the 200 nm mark, such as photoemission spectroscopy and photolithography, could benefit from this work (Applied Physics B 93 323). 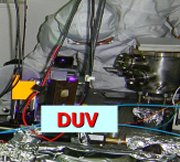 "Our source tunes from 175 to 210 nm via fourth harmonic generation from a Ti:sapphire laser," Zuyan Xu of the Chinese Academy of Sciences told optics.org. "The highest output power is 2.23 mW at 193 nm but the power is above 1 mW between 182 and 210 nm. This is the first demonstration of a milliwatt-level widely tunable all-solid-state laser below 200 nm by direct second harmonic generation."

The output from the Ti:sapphire (more than 3W across the range of 690–840 nm) is focused into a set of BBO crystals to generate UV light between 340 and 415 nm. This light is then passed into the KBBF crystal to generate the DUV wavelengths.

"The DUV light that we generate is quasi-continuous-wave with a repetition rate of 8 kHz and a pulse width of approximately 20 ns," commented Xu.

When it comes to producing tunable DUV light, one alternative approach is sum-frequency mixing. This however uses two laser beams making the system complex and of limited practical use. To remove this complexity, Xu and colleagues use a KBBF crystal that offers a direct route to DUV light below 200 nm using just one beam.

"KBBF is the only crystal that can obtain DUV light below 200 nm by second harmonic generation but using the crystal is problematic," explained Xu. "KBBF is a layer-structure crystal, which makes cutting along the phase-matching direction impossible. We invented a special prism-coupling technique to solve this problem."

With this successful demonstration under its belt, the team is now looking to produce higher powers and a wider wavelength range. The long-term goal is to commercialize this work.