Levy flights in an optical material were observed by a team of scientists for the first time in May this year. Marie Freebody speaks to Diederik Wiersma, the man at the head of the group, to find out the significance of this type of light travel and its possible applications. 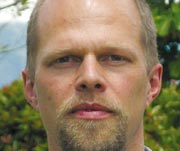 Diederik Wiersma is research director at the European Laboratory for Nonlinear Spectroscopy at the University of Florence, and at the National Institute for the Physics of Matter, in Italy. He heads up a research group that deals with photonic materials on micro and nanometre length scales. His group has played a leading role in the understanding of light transport in periodic, quasi-crystalline and disordered structures, including the observation of phenomena such as light localization and random lasers. Recently, the group was the first to observe the optical analogy of Lévy flights and super diffusion of photons in a newly developed material – Lévy glass.

Can you explain the concept of Lévy flights?
Lévy flight is a term used to describe the motion of light when it travels not by conventional Brownian diffusion, but in a random series of shorter and longer steps that together form a Lévy flight.

In conventional diffusion – which is usually used to describe the light transmission through an opaque or translucent material – the movement of light is approximated by a random walk in which the lengths of individual steps are about the same. Each step contributes equally to the average transport properties of the material.