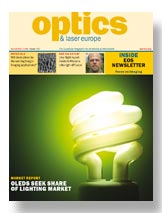 Lévy flights in an optical material were observed by a team of scientists for the first time in May this year. Marie Freebody speaks to Diederik Wiersma, the man at the head of the group, to find out the significance of this type of light travel and its possible applications.

Black silicon moves out of the laboratory

A new photonic material could have significant advantages for detection, imaging and power-generation applications. Tim Hayes asks developers at SiOnyx to explain more.

Arrays of microLEDs can be used in imaging optics, biophotonics and other fields. Simon Andrews explains to Tim Hayes what the impact of this enabling technology could be.

OLEDs seek a home in the lighting market

OLED materials are being developed for solid-state lighting. Michelle Bryner of market analyst NanoMarkets sizes up the potential opportunity for materials and lighting firms.

The optics of cylindrical lenses allow their use in applications for which spherical lenses are not suited. CVI Melles Griot has developed the technology for use in several markets.

As Barack Obama is sworn in as the 44th president of the United States of America on 20 January, all eyes will turn to the White House to see how the photonics industry and science in general will fare. John Marburger, director of the Office of Science and Technology Policy, describes the legacy that is being left by the Bush administration and what changes we can expect to see under the new leadership.