Black silicon moves out of the laboratory

A new photonic material could have significant advantages for detection, imaging and power-generation applications. Tim Hayes asks developers at SiOnyx to explain more. 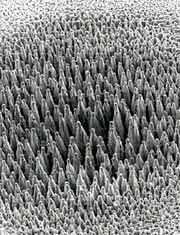 Black silicon, originally invented in a Harvard lab entirely by accident, demonstrates a broader spectral response than conventional silicon and requires a much smaller electrical bias to act as an avalanche photodiode. It combines these advantages in a very thin-layer material, producing a potentially disruptive technology for a range of applications.

"This is a photonics platform that is going to be important in detection, imaging and eventually power generation," said Stephen Saylor of SiOnyx, the US company that has licensed Harvard's black silicon patents. "It is a brand new material with new properties, and it is compatible with the existing infrastructure of silicon processing."

The SiOnyx process exposes the silicon target to high-intensity femtosecond laser pulses in the presence of sulphur hexafluoride. The process changes the chemistry of the silicon surface and also transforms it from a smooth shiny wafer into a nano-structured surface absorbing almost all of the visible light striking it.