Funding for the European Extremely Large Telescope is given top priority in a new 20-year investment roadmap. 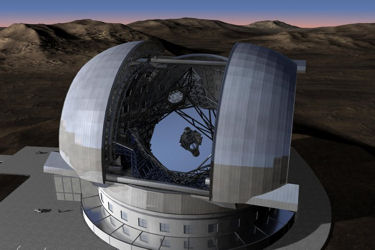 Astronomers across Europe have given their backing to a 20-year roadmap that defines scientific challenges and how to address them cost-effectively. One project that comes out favourably is the proposed European Extremely Large Telescope (E-ELT), which is seen as a flagship venture.

"The top-ranking of the E-ELT in the roadmap is a strong endorsement from the European astronomical community," said ESO's director general, Tim de Zeeuw. "This flagship project will indisputably raise the European scientific, technological and industrial profile."

The Roadmap addresses projects primarily requiring new funds of €10 million or more from European sources and on which spending decisions are required after 2008. Each project was examined for its potential scientific impact, originality, level of European input, size of the astronomical community that would benefit and its relevance to advancing European high technology industry.

Other top-priority projects include:

• A 4 m European Solar Telescope, to be based in the Canary Islands.

• An array of specialized optical telescopes to detect gamma-ray emission from black holes and other high energy events across the Universe.

• An underwater telescope to detect neutrinos.

• A mission to study gravitational waves from the Big Bang and black holes in the Universe.

• An X-ray mission to study galaxies, galaxy clusters and stars in unprecedented detail.

• Two proposed missions to study Jupiter and Saturn and their satellites.

Among other recommendations, the roadmap also identifies a need for better access to state-of-the art computing and laboratory facilities, and for a stronger involvement of European high-tech industry in the development of future facilities. Other proposals include a series of measures to enhance the public understanding of astronomy as a means to boost recruitment in science and technology in schools and universities across Europe.