An updated report from ElectroniCast suggests that the high-brightness LED segment is largely immune to the wider economic downturn. 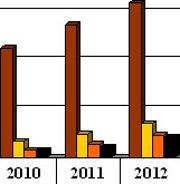 Consumption of LED chips in solid-state lighting (SSL) applications will continue to boom over the next five years, say market forecasters in the US.

According to analysts at Electronicast, who have just updated their LED market predictions, the current economic gloom will do little to dampen SSL prospects between now and 2013.

Stephen Montgomery, director of LED research projects at the Californian consultancy, expects exterior and architectural applications to continue to dominate the SSL market, while the much smaller signage, interior lighting and specialist LED lighting segments will grow very quickly.

Montgomery valued the 2007 market for all LEDs used in SSL at a shade under $284 million, with architectural and other exterior lighting applications accounting for 86% of that total. By 2013, he reckons that total will have more than tripled and that LEDs for SSL will represent a near billion-dollar sector.

Architectural deployments will still be dominant, but their share will have diminished to around two-thirds of the $937 million total. Growing rapidly in value will be the channel lettering niche for signage applications, as well as interior SSL and "other" uses of the technology, for example in aircraft, military and medical applications.

The next US presidential administration looks likely to be beneficial to the SSL industry too, with pre-election policy documents from Barack Obama highlighting high-efficiency technologies as a key part of the president-elect's energy strategy. The US Department of Energy (DOE), which has sponsored much of the development of SSL technology, estimates that some 500 million residential downlights are currently installed in the US. In the unlikely event that all of those downlights were converted to SSL, the electrical savings would amount to some $8.4 billion at current costs, with the DOE's Jim Brodrick estimating that this is equivalent to the output of twelve 1000 MW plants.

Recent DOE tests on downlights in showcase homes in Oregon demonstrated that LED-based lighting saved around 80% of electricity costs when compared with conventional incandescent or halogen lamps. More DOE reports on the impact of LEDs in garage lighting and the architectural SSL project involving a bridge on the interstate 35W highway in Minneapolis are to be released shortly.

Electronicast's updated report on the SSL illumination market is available for $3,378 via the ElectroniCast web site.