Tuneable optical filters that have been fabricated using a simple nanoimprinting method offer unique advantages for display and lighting applications. 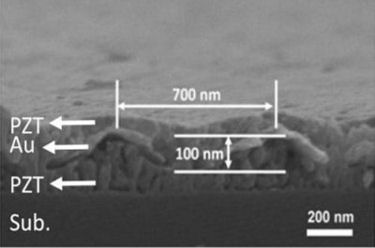 Makers of tuneable laser systems, optical switches and displays may be interested in a simple-to-operate voltage-controlled optical filter being developed by scientists in Taiwan. Patterned using a one-step process, the nanoimprinted periodic metal/ferroelectric film stack is seen as an alternative to multilayer thin-film assemblies and liquid crystal devices in use today (Nanotechnology).

The group's device works by harnessing the phenomenon of surface plasmon resonance – an optically triggered effect that can be exploited to favour the transmission of light over a narrow waveband.

"When light enters the textured PZT/metal/PZT-based tuneable filter, the surface plasmon resonance wavelength displays an obvious transmission peak," Hsuen-Li Chen of National Taiwan University told nanotechweb.org. "To tune the surface plasmon resonance wavelength, both the refractive index of the surrounding PZT films and the period of the textured PZT/metal/PZT structure can be adjusted by both the absolute value and sign of the applied potential."

Bi-directionally tuneable
For example, when a positive voltage is applied across the top and bottom electrode, the layered structure expands and puts the assembly under tension, which causes a decrease in the period of the device. When the polarity is reversed, the layers compress and the period increases (see diagram).

Refractive index effects
The refractive index of the material also plays a role in tuning the device, and increases following an increase in the applied voltage independent of polarity. This means that under a positive potential, the decreasing period of the device is in competition with the increasing period of the surrounding medium. At low applied potentials (up to 5 V), the effect of decreased period dominates and the SPR peak is shifted to shorter wavelengths, whereas at higher values the increased refractive index takes over and produces a red-shift.

The next step for the team is to produce patterned devices with structures that are much closer together. "By decreasing the period of PZT/metal/PZT structure, our devices will be able to work in the visible regime and could be applied in displays or solid-state lighting," said Chen.