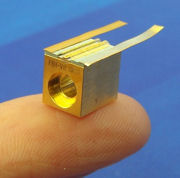 A laser diode has been engineered to emit light above 1100 nm with a vertical divergence angle of just 13° while maintaining high optical power and efficiency. Having achieved this so far elusive combination, the researchers from the Ferdinand-Braun Institute (FBH) in Germany expect that commercial interest for their devices will be high (Optics Letters 33 2188).

"We have developed a diode laser that emits a beam with a very narrow vertical divergence angle," Agnieska Pietrzak, a researcher at FBH, told optics.org. "Such a beam is easier to shape in optical systems and is also easier to couple into an optical fibre. Earlier generations of this work are available through FBH spin-off Eagleyard Photonics and we expect these designs to follow." 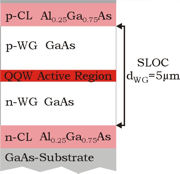 Commercial high-power laser users require the highest possible brightness/power in the highest quality beam. So far, researchers have fabricated laser diodes with record output powers and conversion efficiencies and have also succeeded in optimizing the beam quality. The difficulty is achieving both goals in the same structure.

The FBH team's approach was to increase the thickness of the GaAs waveguide layers that surround the device's quantum well active region. Pietrzak and colleagues were then able to produce 200 µm stripe-width devices with an 8 mm long optical cavity. When mounted on C-mounts, these devices produced output powers of 38 W under quasi-CW operation from a single emitter.

"We have designed a new thick waveguide structure, which allows robust singlemode vertical lasing, low optical losses and low series resistance," explained Pietrzak. "Our diode lasers have a vertical divergence as low as 13º and 95% of the optical power is enclosed in an angle of 21%. Typically, commercial devices have an angle of 35 and 60° respectively.

Pietrzak and colleagues anticipate that their device will be useful for external cavity setups. "The semiconductor chip can be used as a common gain media, which can simply be pumped by current," commented Pietrzak. "Such lasers will address a lot of industrial requirements. The brightness could be especially useful in direct material processing.

The next step for the group is further optimization of the design in order to reduce the vertical divergence angle to below 10° while still maintaining high optical power and efficiency.