Diamond crystals of sufficient size and quality have been grown and used in compact Raman lasers for the first time.

Commercial availability of diamond crystals of sufficient size and quality has allowed a team in Australia to produce a diamond external cavity Raman laser emitting at 573 nm. A Raman laser's ability to convert the beam quality of the pump laser could see diamond-based Raman lasers used in applications as diverse as terahertz threat detection to ultraviolet lasers and directed energy weapons (Optics Express 16 18950).

"The main technical advance that has enabled our demonstration is the fabrication of low-defect single-crystal diamond of sufficiently large size," Richard Mildren, a researcher at Macquarie University, told optics.org. "This achievement could pave the way for new lasers sources over a wide range of wavelengths and with very high average output powers."

Diamond has long attracted interest as a laser material due to its high thermal conductivity, high Raman gain and broad optical transmission (ranging from 220 nm to 3  µm and 5–100 µm). Such properties make diamond Raman lasers useful as a wavelength converter to almost any spectral region.

The problem facing Mildren and colleagues is the lack of large, high-purity and quality diamond crystals. The solution adopted by the team was to use a low-defect single-crystal diamond produced by industrial diamond manufacturer, Element Six, UK. The diamond was grown by chemical vapour deposition to a size of 5 x 5 x 1.47 mm and exhibited excellent transmission at the pump and output wavelength (573 nm). 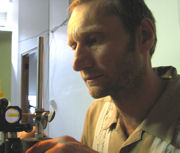 Mildren admits that before the laser can be commercialized, the conversion efficiency needs to be improved and performance needs to be investigated for other pump wavelengths. "We would like to investigate the potential of diamond Raman lasers in the ultraviolet and long-wave infrared regions where other materials cannot operate," he concluded.