A MEMS route to cost-effective hyperspectral imaging could open up new uses in spectroscopy and holography. 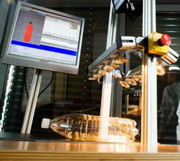 Fraunhofer IPMS has developed a hyperspectral imaging system that uses a cost-effective linear sensor array, making it attractive for a broad range of applications. It is based on the scanning grating chips developed and manufactured at the institute using micro-optical electromechanical (MOEMS) technology.

Hyperspectral imaging collects spectral information across a broad range of wavelengths, generating images from contiguous, rather than disjoint, regions of the spectrum. This can provide a substantial increase in information about the chemical constituents of an object.

"Hyperspectral imaging in the near-infrared (NIR) is an established method, but the current state of the art is very expensive," Ines Schedwill of Fraunhofer IPMS told optics.org. "This is largely due to the expensive InGaAs arrays used to detect the NIR radiation reflected back from the sample."

In the Fraunhofer device, the broadband infrared light reflected by the sample falls onto a microscanner mirror with a superimposed diffraction grating. The microscanner mirror is movable, allowing it to deflect different wavelengths of light in different directions. As a result the detector itself, the most expensive part of the imager, can be a linear detector rather than a two-dimensional InGaAs array.

Organic compounds, for example in plastics or agricultural produce, can be detected by hyperspectral imaging if NIR radiation combined with digital imaging is employed.

One application that has already been trialled by Fraunhofer is analysis of the polymers used in discarded plastic bottles, so that they can be sorted for recycling. Another is to detect damaged fruit before the blemishes show through on the surface, an application where the known advantages of the technique have previously been outweighed by the cost of the equipment.

"The reduced price of the new MEMS micromirror-based system will open a range of applications that were not commercially viable," commented Schedwill. "These include uses in spectroscopy, holography and other applications that have always been theoretically possible, but were not economic."