CMOS technology moves to the next generation

Developments in complementary metal oxide semiconductor (CMOS) technology allow the sensors to penetrate into high-performance applications that were previously not practical. Lars Hansen of Basler Vision Technologies, Germany, describes the current state of the art.

In the past, charge coupled devices (CCD) and complementary metal oxide semiconductor (CMOS) sensors performed in different arenas. CCD sensors were used in applications where exceptional image quality was required but lower speeds were acceptable. CMOS sensors were known for their fast speeds, but less for image quality. The newest CMOS sensors now combine both high speed and excellent image quality, and are rapidly becoming more popular in both area-scan and line-scan machine-vision applications. 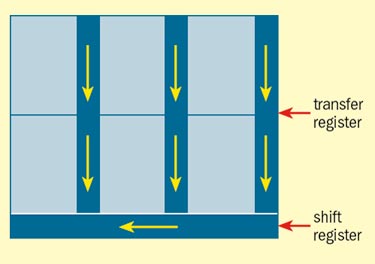 CCD and CMOS sensor technology
The history of digital imaging started in 1970 with the development of CCDs. Initially envisioned as data-storage devices, it was quickly recognized that these components were light sensitive and that they produced a signal proportional to the amount of light applied. The basic principle behind interlaced CCDs is a set of transfer registers beside the light-sensitive surface of the pixels in the CCD. The transfer registers sequentially transport charges from the pixels to shift registers below the sensor (figure 1). CCD pixels can have a fill factor of up to 100%, which means that nearly the entire pixel is light sensitive. The drawback of the charge "transport system" used in CCDs is a limitation on the frame or the line rate (this will be discussed more later on). CCDs provide a relatively low noise level, which leads to very good image quality. The technology advanced quickly and CCDs were used more and more in digital still cameras, astronomy, machine vision, video cameras, fax machines and in many other applications. 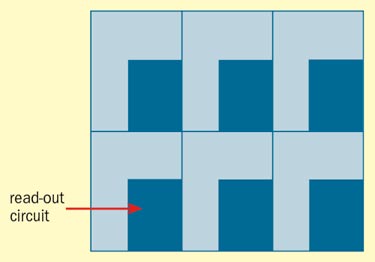 CMOS sensors are characterized by having parts of the electronics, the read-out system and the illumination control located directly adjacent to the photosensitive surface. One main advantage of this design is that each pixel can be controlled and read out directly. A drawback is that a part of each pixel is occupied by electronic components, which reduces the fill factor (see figures 2 and 3). CMOS technology allows a variety of both analogue and digital functions to be integrated directly into the sensor. This means that analogue data can be amplified and converted into a digital signal right on the chip. Memory, timing generators and other preprocessing steps can also be integrated.

Where speed is vital
Over the last decade, the pressure to increase the throughput of industrial production systems has grown continuously. This requires faster acquisition speeds in digital-vision products, and there is an ongoing demand to increase the efficiency even further. A precondition for meeting this demand in digital cameras is the ability to deliver growing data rates for both area-scan and line-scan cameras. Line-scan cameras in particular are used in systems that perform endless inspection (e.g. surface inspection of paper, lamin-ates or printed goods) where the speed is an essential factor.