Sitting at the heart of Europe, the Netherlands is a photonics hub. Marie Freebody speaks to people who live and work in the country to uncover the reasons behind this success.

The Netherlands has a long history as a key trading centre in Europe thanks to its strategic central location and excellent infrastructure. The Port of Rotterdam is Europe's largest seaport, while Schipol Airport in Amsterdam is recognized as one of the major hubs in Europe. 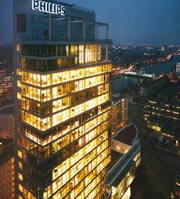 The photonics industry employs around 250,000 people across Europe, of which approximately 10% are in the Netherlands. Dutch annual revenue totals around €4.4 bn, which is 10% of the European production volume and 2% of the world market. Most of this production volume is due to Dutch giants such as ASML and Philips, together with an emerging generation of smaller high-tech companies and spin-offs. The Netherlands also boasts a highly educated and multilingual workforce, which is why the country is often seen by international companies as the first logical step into Europe.

Philips generated much optics activity in the country largely thanks to its pioneering role in data storage. Today, as is the trend with much of Europe, Philips has moved more towards optical applications in medicine, such as blood analysis, spectroscopy of the skin and optical imaging.