Silicon-core optical fibres that can be mass-manufactured using a conventional fibre-draw process unite optoelectronics and fibre-optics. 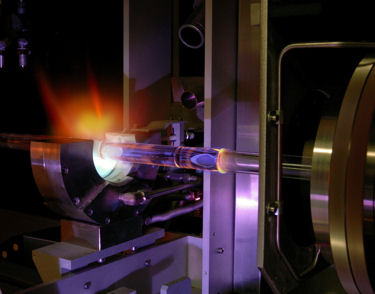 Silicon-core optical fibres that can be mass-manufactured

Researchers in the US have fabricated optical fibres with a silicon core using mass-production fibre draw processes. The commercial availability of such silicon optical fibres could lead to more compact devices with decreased power consumption in applications such as telecommunications (Optics Express 16 18675).

"We have realized an industry relevant mass-production process for developing silicon optical fibres," John Ballato, a professor at Clemson University, told optics.org. "This is the important step that takes these fibres from being an academic curiosity to a potential commercial opportunity."

Optical fibres typically comprise a glass core surrounded by another glass of similar composition and are fabricated by a process of heating and drawing out into long wires. The US team is using a similar manufacturing approach but has replaced the glass core with silicon, which it says offers key advantages.

"Silicon is transparent further into the infrared than conventional glasses, which opens the door to selected biomedical and sensor applications that conventional fibres cannot fulfil," commented Ballato. "What's more, silicon has a significantly higher Raman coefficient so the silicon core could be used to shift wavelengths out to the infrared where light sources are more difficult to make." 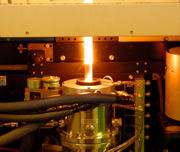 The group fabricated a 1 mm glass-clad silicon fibre with a core size of around 150 microns. "Our process is to sleeve the silicon core inside a silica (glass) cladding at the temperature where the glass cladding softens and draws into fibre (approximately 1950°C)," explained Ballato. "The crystalline core is molten and the liquid goes along for the ride and then solidifies as the fibre cools."

According to Ballato, the silicon fibres could find biomedical applications in the mid-IR, and Raman fibres for mid-IR light sources for sensing and security applications. "In terms of Raman applications, for a given wavelength, the silicon fibre should have about 10,000 higher Raman effect than conventional glass fibres," he added.

Future work for the group will focus on reducing the currently high attenuation of the silicon fibre and also investigating other infrared and nonlinear materials. "We hope to reduce the attenuation considerably by finding a better cladding glass that is matched in temperature and thermal expansion to the silicon," concluded Ballato.