An elastic bandage incorporating plastic optical fibre can be worn around the chest and abdomen to monitor patient's breathing. 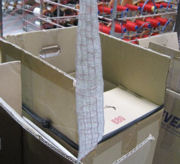 Researchers in Europe have developed a wearable textile fitted with optical sensors that could be used to remotely monitor a patient's breathing patterns while they undergo magnetic resonance imaging (MRI) scans. The new textile will allow medical staff to keep an eye on children and other vulnerable patients who often have to be calmed with sedatives or anaesthetic drugs to keep them still during a scan.

The technique will be particularly useful if proposed European Union (EU) legislation that is designed to protect medical staff from being exposed to the high magnetic fields of MRI systems comes into force in 2012. The new rules would prevent nurses from being in the room where the scan is taking place.

Developed by members of the EU funded OFSETH project, the textiles are plastic optical fibres woven into an elastic bandage that is worn around the chest and abdomen. In the part of the bandage that surrounds the abdomen, fibres are aligned sinusoidally with each other. As the patient breathes, the material expands and contracts causing the radius of the sinusoid to alter. This then changes the intensity of light being emitted from the fibre, which in turn reveals the breathing rate.

In the chest region, a fibre Bragg grating is constructed in a short segment of the optical fibre that reflects a different colour of light depending on how much it is stretched. "By detecting which colour is reflected and by measuring the frequency of the modification of the colours you can determine the frequency of the patient's respiration," says François Narbonneau of the Multitel research centre in Mons, Belgium, which is coordinating the project. The researchers are also developing a fingertip sensor that monitors blood-oxygen levels based on the absorption of near infra-red light through body tissue.

Unlike alternative remote-monitoring systems, the light-based system contains no metallic parts, thereby eliminating the risk of burns from induced currents and thus making it safe during lengthy MRI examinations. A prototype textile harness is currently being tested on adult volunteers at the Centre Hospitalier Régional Universitaire de Lille, France, one of the project partners.