Both parties welcome the union of their complementary technologies and predict a bright future in high-volume applications. 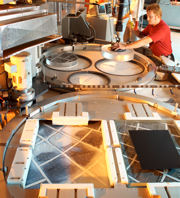 A merger between US firms Zygo and Electro Scientific Industries (ESI) has been agreed and enthusiastically welcomed by senior management. "The combination will create a photonics powerhouse," Nicholas Konidaris of ESI told investors. "It produces a premier photonics group and a worldwide centre of excellence for optics." Revenues for the combined companies in 2007 were approximately $458 million.

The merged company will focus on micromachining applications, in both semiconductor and microelectronics markets, and in the metrology sector. The latter will include development of in-line high-volume production systems for lithography, and also instruments for high-precision interferometry in lower volume industries and research labs.

Both Zygo and ESI were keen to stress the beneficial overlap of their core competences in microengineering, high-volume solutions and photon characterization. Despite this overlap, no changes to the product line are currently foreseen.

"The merger will allow us to better execute our growth strategy into high-volume applications," said Zygo CEO Bruce Robinson. "The combined company will have the size and scale to make specific investments and compete in global markets."