A photonic crystal fibre has for the first time been engineered to transmit sub-100 fs pulses over extended distances. 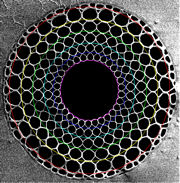 Researchers from Russia and Germany have fabricated a chirped photonic crystal fibre that guides ultrashort pulses with much less distortion than previous designs. The team says that applications requiring ultrashort pulses and flexible beam delivery such as photodynamic therapy and two-photon microscopy could benefit (Nature Photonics doi:10.1038/nphoton.2008.203).

"No fibre-based technology performs as well in terms of guiding sub-100 fs pulses of considerable energy (nanojoules)," Günter Steinmeyer, a researcher at the Max Born Institute in Germany, told optics.org. "Our design effectively reduces distortion effects such as stretching of the pulses and pulse break-up, which decreases the peak power of the pulse."

The team fabricated photonic crystal fibres with core diameters of 22 and 53 microns and believes that fibre lengths of up to 1 km can be manufactured. The fibres operate around 800 nm range and exhibit transmission bandwidths of up to 120 nm.

Until now, photonic crystal fibres have been manufactured so that every cell in the design is of equal size. The team has instead introduced a radial chirp so that the cell size changes along the radius of the fibre.

"Chirping is a popular concept in ultra-fast optics and has already been successfully applied in one dimensional photonic structures such as chirped mirrors and chirped fibre Bragg gratings," commented Steinmeyer. "Chirping usually increases the dispersion of the device, but in chirped photonic fibre, dispersion effects are much weaker than an unchirped structure."

In the design, the fibre consists of a hollow core surrounded by five circular layers of glass tubes of different diameters. Each layer consists of 30 identical cells with radii ranging from 1.35 µm at the innermost layer to 2.6  µm at the outermost layer.

Steinmeyer and colleagues speculate that the weaker dispersion is due to a process called amorphization.

"Depending on the wavelength, light experiences reflection in different resonant sections of the chirped cladding, effectively localizing reflection to a particular layer of the structure," explained Steinmeyer. "We think that distributing the cell resonances over a wide wavelength range lessens their negative effect on the dispersion."

One drawback of the group's design is that it is no match for the extremely low linear guiding losses demonstrated by single-cell hollow core fibres. The group hopes to reduce these losses and fabricate fibres with even wider transmission bands by modifying the geometry of the fibre.