India has launched its first spacecraft to the Moon. It carries a suite of optical instruments designed to create the highest resolution 3D maps of the lunar surface. 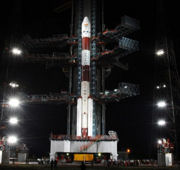 Chandrayaan–1 on the launchpad

An unmanned spacecraft successfully launched from Sriharikota, an island off the coast of the southern state of Andhra Pradesh at 06:22 local time and is expected to arrive in the Moon's orbit on 27 October. With its payload of 11 instruments, the Chandryaan–1 spacecraft will examine the surface of the Moon with a resolution of 5–10 m and provide a complete chemical mapping of the soil.

The Chandryaan–1 craft, was commissioned in 2003 by the Indian Space Research Organisation (ISRO) at a cost of $83 m. Chandrayaan — Sanskrit for "mooncraft" — is expected to last two years and will orbit the Moon 100 km above the surface to perform remote experiments at visible, infrared and X-ray frequencies.

The craft weighs more than 1300 kg and carries 11 instruments — five scientific payloads from India and six from outside space agencies. Chandryaan–1 will also carry a 25 kg impactor — bearing the Indian flag — that will hit the surface and throw up lunar dust, which will be instantly analyzed by an Indian-built mass spectrometer. The two main scientific objectives of the mission are to outline the surface of the Moon with a spatial resolution of 5–10 m and to map the entire lunar surface for elements such as magnesium, iron, uranium and thorium with a resolution of 25 km.

The other four India-based payloads are a stereo camera to map the lunar surface in visible wavelengths, a laser interferometer to measure the lunar topography and a spectral imager to measure the chemical composition of the crater regions on the Moon. A high-energy X-ray spectrometer will study the radioactive decay of uranium-238 and thorium-232 in the lunar soil. "Chandrayaan–1 shows the maturity and vision of the Indian space programme," said Bernard Foing, executive director of the international lunar exploration working group of the European Space Agency (ESA).

Unlike China's lunar orbitor Chang'e–1, which launched in October last year, Chandryaan–1 features instruments built by foreign agencies. These include a soft X-ray spectrometer constructed by the Rutherford Appleton Laboratory in the UK and an infrared spectrometer developed by the Max-Plank-Institute for Solar System Research in Lindau. Both of these projects are supported by ESA and will look for traces of elements such as magnesium, aluminium and iron in the lunar soil.

Chandryaan–1 will also try to bury existing controversies such as the presence of water ice in the permanently shadowed regions of the lunar poles. A miniature imaging radar built at the Applied Physics Laboratory at Johns Hopkins University in collaboration with NASA will study the reflection of radio waves from the poles to look for signatures of water ice.

According to Parameswaran Sreekumar, head of space astronomy and Instrumentation at the ISRO satellite centre in Bangalore, many of the instruments onboard Chandrayaan–1 will be unique compared with other lunar missions. "Chandryaan–1 provides a new national thrust in scientific research in space science," said Sreekumar. "It will energise the public and enthuse the academic community to take up planetary sciences."

India's launch of Chandryaan–1 comes hot on the heels of both Japan and China's launch of lunar orbitors late last year. Chang'e–1 had eight instruments onboard for its year-long trip, which is due to end next month, while SELENE launched in September 2007 for one year had 13 scientific payloads.

However, India's plans for the Moon don't end with Chandrayaan–1. India plans a robotic Moon lander — Chandryaan–2 — by 2012 that has recently been given the go-ahead by the government. "The collaboration in instrument development [for Chandryaan–1] will open the way for future collaborations on landers," said Foing. A manned mission in space is also planned by 2015 similar to the Chinese mission last month and a manned mission to the Moon by 2025.