Detecting quantum dots in the dark

A new technique that detects the light absorption by a single quantum emitter could enable sensing applications without the need for fluorescence labelling. 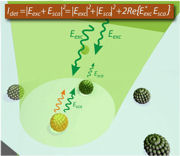 Researchers at ETH Zurich have detected the light absorption by a single quantum emitter under ambient conditions for the first time. The technique can image emitters in the "quenched" state, help directly observe single biological macromolecules without the need for fluorescence labelling and might enable applications in biology, such as sensing (Nano Letters doi:10.1021/nl801735y).

Until now, the most common way to detect single molecules was by looking at their red-shifted light emission, or fluorescence. However, most molecules absorb rather than emit light.


Vahid Sandoghdar and colleagues have exploited this fact in a new technique that is essentially a miniaturized version of an absorption spectrometer, except that it works in reflection rather than transmission mode. There is also an additional "knob" that can be "turned" to maximize the signal.

The researchers focus coherent laser light (using a standard optical microscope) onto a sample and observe the back-reflected light while the sample is moved with a piezo-scanner. They measure the tiny change in signal, of just 0.01%, by eliminating background fluctuations from laser intensity noise and from the roughness of the underlying substrate. In this way, they have succeeded in increasing the signal by a factor of 10.

"The work demonstrates that detecting single-molecule-sized absorption signals is by no means beyond what is experimentally possible," team member Philipp Kukura told nanotechweb.org.

Being able to detect species at the molecular level could be useful for sensing applications in biology and observing enzymatic or binding/unbinding events without the need for fluorescent labelling, he adds. "Indeed, many biological complexes are large enough to produce a signal 100 times greater than that from single quantum dots," he explained.

The researchers will now investigate other techniques, such as lock-in detection, to suppress unwanted noise and improve visibility. This will allow them to observe single molecules, which provide a signal several times smaller than that from quantum dots.