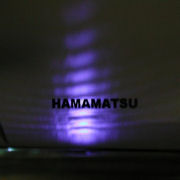 The team reduced the wavelength of light its lasers emit under pulsed operation from its previous best of 355 nm to 342 nm – but is mainly pleased with the device design.

“Our achievement is growing an indium-free AlGaN laser on a sapphire substrate,” Harumasa Yoshida, corresponding author on the paper, told compoundsemiconductor.net. “It [enabled the] breakthrough to the deep ultraviolet region.”

Laser diodes are particularly sensitive to defects in their epitaxial structure, which can act as centres where electrons and holes combine without emitting light.

By contrast, increasing the proportion of aluminium in lasers grown on sapphire increases tensile strain in the material, leading to more defects and cracking. Nevertheless, increasing the lasers' aluminium content is exactly what Yoshida wants to do.

“To achieve shorter wavelengths,” he said, “probably the best solution is to fabricate indium-free AlGaN multiple-quantum-wells in AlGaN guiding and cladding layers.”


What allows Hamamatsu to do this is its novel approach to MOCVD, known as hetero facet controlled epitaxial lateral overgrowth (hetero-FACELO) (see related story Pyramids produce crack-free UV lasers). This produces pyramidal seed crystals by growing GaN over arrays of 2 µm wide silica stripes. Subsequent growth occurs laterally from these seeds, and although defects are formed, crystal quality improves as deposition goes on.

In this case, the lateral growth produced an Al0.3Ga0.7N layer that the team says was “almost equivalent” in quality to the Al0.2Ga0.8N base material used for its previous 355 nm device (see related story Crack-free AlGaN growth aids UV lasing). After making AlGaN cladding, guiding and active layers, etching mirror facets and depositing metal contacts, the device operated with a threshold current of around 390 mA. Yoshida and his colleagues measured the pulse output power to be 16 mW, near to one side of the laser cavity facets.

“This demonstrates the potential of AlGaN-based materials operating as lasers over a wide range of UV wavelengths,” commented Colin Humphreys, professor of materials science and director of the GaN centre at Cambridge University, UK. “It is a significant achievement.”

The Hamamatsu team points out that deep-UV lasers could be used in a successor technology to Blu-ray optical discs, as well as material processing and chemical analysis. However, it concedes that its device's series resistance – which is around 32 Ω at the threshold current – is high for a laser diode. They agree that this must be improved, and that this would also help the device achieve continuous-wave performance – both of which are goals that Humphreys is in favour of.

“Pulsed current conditions limit the use of the laser, what is really required is continuous operation,” he said.

“Also we know nothing about the lifetime of this laser. For these lasers to be more widely used these problems need to be overcome, but this is a very promising start.”