Researchers in the US unveil a silicon-based CCD camera that mimics the shape of a human eye. 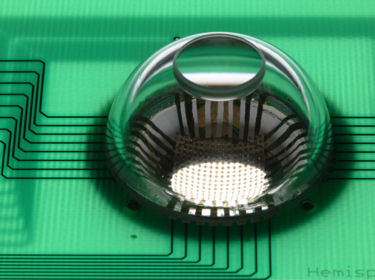 Electronic eye camera mimics the shape of the human eye

Scientists have overcome the fragile and brittle nature of silicon to successfully transform a 2D planar detector into a compact hemispherical shape. The team believes that its technique opens up new design avenues for advanced camera systems, in which not only the lenses but also the geometrical layouts of the detector arrays can be optimized (Nature 454 748).

"We have translated conventional 2D planar optoelectronic technologies onto the curvilinear surface of a hemisphere," John Rogers, a researcher at the University of Illinois, told optics.org. "Our design offers a wider angle field of view, lower aberrations and improved illumination uniformity compared with planar CCD cameras that use simple, single-component imaging lenses."

Conventional cameras rely on flat image-recording surfaces and require multiple combinations of different lenses to produce distortion-free images. Although many attempts have been made to develop compact eye-shaped cameras, scientists have not been able to fabricate electronic components that can tolerate the mechanical strains required.

The team's solution was to use ultra-thin ribbon cables to interconnect the pixels in the photodetector array. According to Rogers, the 1–2 µm thick flexible cables are the smallest in the world and allow the metal interconnects within them to be flexed without fracture.

"Since the metal interconnects are so brittle we sandwich them between two layers of flexible polymer so that when it bends, the metal experiences nearly zero strain," explained Rogers. "This leads to very mechanically robust interconnects that are capable of absorbing the strains associated with planar to hemispherical transformation."

In the setup, a passive-matrix focal plane array is manipulated from a flat wafer into a hemispherical one using a carefully prepared elastomeric transfer element. The 16 × 16 array consists of single-crystalline silicon photodetectors, current-blocking p-n junction diodes and chromium-gold-chromium interconnects.

The transfer element is fabricated from poly(dimethylsiloxane) (PDMS) to have a radius of curvature of around 1 cm. This elastomeric element is then stretched into a flat "drumhead" shape, which can directly receive the planar detector array. After transferring the focal plane array to the flat surface of the tensioned transfer element, the system is allowed to relax back into its original hemispherical shape.

"Releasing the strain on this element causes it to snap back to its original hemispherical shape taking the detector array along with it," explained Rogers. "The compressive forces on the mesh cause the tiny interconnects to pop-up out of the plane in the form of arc-shaped bridges, which avoids any strains in the brittle silicon pixels."

In the final step, the hemispherical detector array is attached onto a rigid, hemispherical glass substrate using a thin layer of glue. 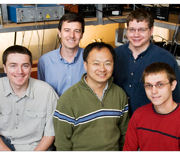 The group is now investigating more sophisticated cameras that involve a greater number of pixels and optimized shapes. Rogers and colleagues are also exploring similar approaches to integrate electronics (i.e. sensors and signal processing systems) into biomedical devices that can be implanted into the human body.

"We would like to explore the possibility of implanting these devices into the human eye, for people who suffer from degeneration of the retina," concluded Rogers. "We would, however, have to first solve the problem of biocompatibility and biointerfaces."