Increasing sales and an order for fibre lasers to weld car doors demonstrate growing confidence in the effectiveness of laser manufacturing tools. 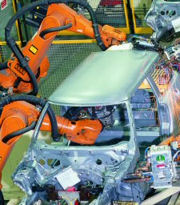 IPG Photonics is supplying fibre lasers to BMW, breaking the tight hold of its rival Trumpf on sales of material processing lasers to German auto-makers. The vertically integrated diode-laser manufacturer is due to deliver ytterbium fibre-laser systems with 63 kW of total output power to BMW in the final quarter of 2008.

"Our main target was to break into German car makers," said Valentin Gapontsev, IPG Photonics' CEO. "For us this has really opened the door for penetration into the automotive market." IPG says that the contract for tools used in welding car doors represents the first large-scale production use of fibre-laser systems for the BMW Group.

It adds to IPG's list of existing automobile customers outside Germany, which includes Hyundai, Nissan, Toyota and the PSA group that makes Peugeot and Citroen cars.

In the three months ended June 2008 84% of IPG Photonics' total $56 million revenues came from material-processing applications. Sales into this area grew 6% sequentially and 42% over the same time in 2007.

IPG says that its systems offer much better yields than early experimental laser material processing tools. Some of these performed so badly that they turned automotive manufacturers' senior management against the technology. The Oxford, Massachusetts, headquartered company's manufacturing equipment now seems to be changing that perception.

"Our results this quarter reflect the growing penetration of our fibre lasers into new industrial manufacturing applications, the marketplace's growing acceptance of the benefits of our fibre lasers, and our presence in the world's major industrial manufacturing markets," commented Gapontsev. "We are particularly pleased that IPG's fibre lasers continue to win orders over legacy laser technologies in a number of high-profile installations." The BMW order, which came shortly after the close of the quarter, was a further demonstration of this trend according to Gapontsev.

IPG's MBE-grown GaAs laser diodes, available in powers up to 25 W, combine in the higher-power systems to offer significant power-efficiency savings compared with other laser technologies. Making its own diodes as well as performing subsequent integration gives IPG Photonics another competitive advantage, allowing it to deliver systems comparatively quickly.

On a per-watt basis, IPG says that its systems cost only 15% of the typical cost of other systems on the market. Even in the particularly conservative automotive market, where existing supplier relationships are hard to overturn, these numbers are difficult to ignore.

The heavy focus on capital equipment sales continues to serve IPG well, as it recorded a $8.6 million net profit in the quarter, up from $6.4 million year-on-year.

IPG says that its overall sales in the September quarter will grow further, predicting that it will receive between $57 million and $61 million in that period.