Tiny structures that resemble propellers are giving researchers an accurate recording of the handedness of circularly polarized light. 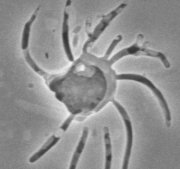 Focusing circularly polarized (CP) femtosecond pulses into fused silica produces tiny propeller-shaped chiral structures that record the handedness of the incident light. That's the finding of a Canadian team, which believes that this is the first demonstration of permanently recorded light helicity inside an optically isotropic bulk dielectric material (Optics Letters 33 1312).

"The role of polarization is critical in defining the morphology of femtosecond laser-modified glass," Cyril Hnatovsky from Oz Optics told optics.org. "The chiral structures consist of a highly modified central core surrounded by curled spokes. As the number of laser pulses increases, the curled spokes become more developed."

The term helicity refers to the handedness of the CP light, right-handed versus left-handed. An object is referred to as chiral if it differs from its mirror image in such a way that it cannot be superimposed on the original object.

The team used a Ti:sapphire laser operating at 800 nm and a repetition rate of 100 kHz. The pulse energy and duration that produced the best results were found to be from 200 to 400 nJ and around 150 fs respectively. Hnatovsky adds that the probability of producing a structure diminishes dramatically when the pulse duration exceeds 300 fs.

"Chiral structures cannot be created using 10 pulses or less," he commented. "As the number of pulses is increased from 100 to 1000, the structures develop into more complete swirls. Higher exposures (up to 107 pulses) bring no further development to the unit morphology. The chiral structures are less than 1 µm3 and are observed very close to the top of the laser-modified zone at depths from 1 to 3 µm."

"For each irradiated spot we observe only one chiral structure," said Hnatovsky. "We have confirmed this for the fixed focus writing by polishing the sample in multiple steps. After each polishing cycle, less than 1 µm was removed."

The key feature of the chiral structure is its core, which is produced first and appears to be a necessary precursor for the formation of the surrounding curled spokes.

"We are still trying to fully understand how the structures are created," concluded Hnatovsky. "A nanoplasmonics model provides a reasonable qualitative description for the evolutionary nature of nanoplasmas to form the central core of a swirl. Detailed 3D modelling is necessary to ascertain the origin of the pulse-to-pulse nonlinear material memory that allows the self-organization to proceed."