Lasers are being exploited in the manufacture of both silicon and thin-film solar cells. Gaetan Rull of Yole Developpement sizes up the opportunity for laser makers.

The most important objective for today's photovoltaic (PV) market is to reduce the ratio of manufacturing cost to power output, and more specifically for solar modules, the manufacturing cost per kilowatt hour (kWh). With this in mind, technical solutions are required to reach grid parity and make PV a competitive energy source. Lasers already have several applications in the PV manufacturing process such as edge isolation or cell structuring. This article will describe the PV industry from the production side and then focus on opportunities for laser manufacturers. 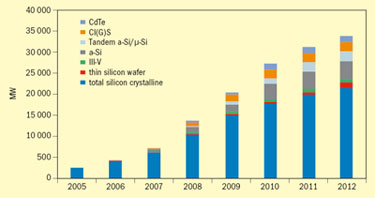 Tracking PV technology
In 2007, crystalline silicon solar cells (c-Si) remained dominant with over 85% of the production, but we observed a strong increase in production capacity in PV thin films (see figure 1). After ULVAC and Oerlikon, the entrance of AMAT changed the future landscape of the PV industry while boosting the production capacity of amorphous silicon (a-Si)and tandem amorphous and crystalline silicon (a-Si/µ-Si) modules.

As reported in Yole's "PV Fab Database 08", we expect the production capacity of a-Si-based thin films to jump from 1.4 GW at the end of 2008 to 2.4 GW in 2009 and 5 GW in 2010. Several fabs reaching a size of 1 GW will be installed in the coming years and we expect the PV industry to follow the same trend.