Optical technology originally developed for space missions has been adapted for an airborne environmental monitoring programme. 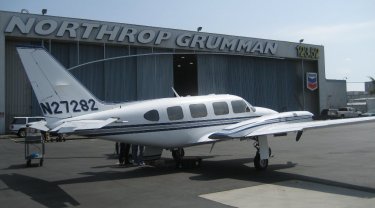 A high-resolution imaging device developed by Northrop Grumman has been used in an airborne programme to collect spectral data from the Santa Margarita Ecological Reserve. The programme, which also involves NASA's Ames Research Center and several partner universities, will enable scientists to obtain a close-up view of environmental changes within the reserve.

The key instrument in the programme is a hyperspectral imager, which Northrop Grumman initially engineered for use in space. Now, however, the company has designed a commercial off-the-shelf imager, called the Hyperspectral Airborne Tactical Instrument (HATI), that can be mounted in an aircraft flying over the reserve.

"The HATI airborne demonstration shows our ability to collect and exploit high-quality hyperspectral imagery," said Mark Folkman of Northrop Grumman Space Technology. "It exploits low-cost commercial hardware that ultimately we will use in our space systems."

The HATI instrument works by detecting light from hundreds of narrow spectral bands, ranging from 0.4 µm in the visible to 1 µm in the near infrared. "We use dispersive spectrometers to spread the wavelengths across one dimension of a two-dimensional focal plane array," explained Folkman. "The second dimension gives us a line image that we then scan, using the aircraft motion to create a 2D spatial image with hundreds of spectral bands for each pixel."

Data taken by HATI will be merged with ground observations to study and map burn scars, vegetation regeneration, soil erosion, invasive species and habitats. A ground truth capability, which will be used to calibrate and validate the hyperspectral images, will also be implemented.

The team now plans to demonstrate how the hyperspectral imaging data could benefit earth scientists in a range of applications. "We are looking to work with customers who are interested in very low-cost HSI sensors for earth science missions, such as coastal waters imaging, land use, vegetation characterization and monitoring, wildfires, pollution and environmental damage," said Folkman.

Northrop Grumman is also keen to investigate whether the technology used in HATI would be suitable for use in space. "We plan to establish the viability of this design for the space environment and launch, and to redesign any of the elements that don't fit our space needs."