Researchers in Korea believe that their tiny green laser ticks all the boxes for mobile projection applications.

The smallest green laser containing a built-in temperature controlling unit has been built by researchers in Korea. The device measures just 0.7 cubic centimetres, which is nearly the same size as existing red and blue diode lasers, has an electrical-to-optical conversion efficiency of 7.8% and a 25 mW power output. These performance characteristics could see the device being used in mobile projection applications (Applied Physics Express 1 062005). 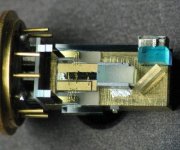 Many major IT and display companies are keen to put projectors into mobile phones and other hand-held devices. However, such applications require red, blue and green lasers with specific characteristics. Although red and blue lasers are already available as edge-emitting laser diodes, a green laser has been more difficult to make.

Now, Do-Kyeong Ko of the Gwangju Institute of Science & Technology (GIST) and colleagues report on a diode-pumped microchip green light source based on a composite crystal of Nd:YVO4 doped with 3% Nd. The device has a built-in thermoelectric unit that allows the temperature of the light source to be kept a steady 51 °C for optimal functioning.

The researchers used a small chip-on-submount type infrared laser diode with a wavelength near 808 nm and optical power of 250 mW as the pump source. The Nd:YVO4 crystal was used to convert the IR into green light. The small thermoelectric element was epoxy-bonded onto the stem base for active control of the pump IR LED and laser medium. All of the optical elements were mounted on a copper block.

"To the best of our knowledge, this diode-pumped microchip green light source is the smallest green laser in which the temperature-controlling unit is built in," Ko told optics.org. "The compact green module should be powerful enough for laser projection displays in telephone, PDAs and other hand-held devices. If major technology companies can obtain a compact green laser source, they will be willing to develop mobile-phone projectors and then launch these products."

The researchers are now trying to make the devices in different shapes with the same or smaller volume. They will also need to determine the optimal conditions for obtaining higher output power with low electric consumption. "If the performance satisfies these criteria, we will put the green light source into a real mobile projection module and test it," revealed Ko.

Matthew Brennesholtz of Insight Media, a consulting company focused on the display industry, says that the new work is significant: "Red and blue lasers suitable for small projectors (pico-projectors) are already available as direct emission laser diodes but there are no direct emission green lasers," he explained. "15 mW for the thermoelectric cooler seems like an acceptable power budget for the cooler and the 25 mW output is also in the correct range for a pico-projector."

He also adds that the 7.8% electrical-to-optical conversion efficiency is competitive with other sources but points out that the green laser cannot be used in certain specialized designs of pico-projectors, such as those with scanning mirror systems.

Belle Dumé is a freelance science and technology journalist based in France.
RELATED LINKS
RELATED STORIES