Matching the needs of your application with the numerous ultraviolet detectors on the market can be daunting. Tim Stokes of Hamamatsu Photonics offers his advice.

The ultraviolet (UV) spectrum encompasses wavelengths that are shorter than those visible to the human eye and longer than X-rays. When it comes to deciding on the right detector technology to adopt in your UV application, you will find many options on the market, each with a variety of pros and cons. This article outlines the technologies that customers will come across in their search for UV detectors and offers advice on performance levels.

Phototubes and photomultipliers
Phototubes appeared about 100 years ago and were the first scientific devices to measure UV light. Exploiting the photoelectric effect, phototubes generally consist of a metallic or semiconductor material coated inside a vacuum chamber to form a photocathode.

When UV photons of high enough energy are incident on the cathode, photoelectrons are emitted into the vacuum and are attracted to the anode at high electrical potential. The resulting photocurrent gives a quantitative measurement of the intensity of the UV light arriving at the photocathode. The expression E=hc/λ, where E is the photon energy, shows that the photocathode material must have a work function greater than 5 eV to detect 254 nm light from a mercury lamp.

In order to measure lower UV intensities, these original detectors were replaced by the photomultiplier tube (PMT). A PMT's vacuum tube contains a series of intermediate dynodes that provide a high level of gain for the photoelectrons emitted from the photocathode. This noise-free gain means that the output at the PMT anode can be one million times greater than the original signal.

Today, phototubes have largely been superseded by semiconductor detectors (in particular photodiodes, which are discussed later) but the PMT's ability to produce highly amplified signals without any increase in associated noise levels, means that it remains the detector of choice in many analytical measurement applications. Examples include UV-VIS spectrophotometers, atomic absorption spectrometers and DNA sequencers to name a few.

Although most photocathodes are capable of detecting UV photons, one limiting factor is the entrance window of the vacuum tube. This is usually made of a borosilicate glass so that UV photons below 300 nm cannot be detected by the PMT. To detect shorter UV wavelengths, special window materials such as synthetic silica (to 160 nm), UV glass (to 185 nm) and magnesium fluoride (to 115 nm) are required (see figure 1).

Photodiodes
Photodiodes are the UV detector of choice for many applications today. Electron-hole pairs are generated within a semiconductor when its bandgap is less than the energy of an absorbed UV photon (approximately 3.5 eV at 365 nm). The resulting photocurrent gives a measure of the incident UV light intensity.

The most common semiconductor detector is the silicon photodiode (a selection is shown in figure 2). With a bandgap of 1.12 eV, this device can detect from 400 nm right through to around 1100 nm. Silicon oxides usually form on the front surface of the photodiode during its fabrication, which act as a passivation layer. As this is essentially a glass layer, it absorbs UV radiation making most silicon photodiodes insensitive to UV light.

That said, it is possible to produce silicon devices that are highly sensitive to UV radiation with quantum efficiencies in excess of 80% by modifying the fabrication and passivation processes. As with vacuum tubes, using a quartz glass window permits detection down to 190 nm and both VUV and extreme UV wavelengths can be detected using a photodiode without any window. 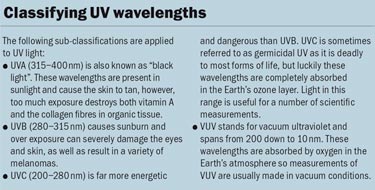 Today, many other semiconductor materials that have higher bandgap energies than silicon are available on the market. Materials such as GaAsP, GaN and SiC have the advantage of being more "UV specific" but as they are not manufactured in such large volumes they tend to be far more expensive than comparable silicon photodiodes, with wider variations in performance from batch to batch.

It is important to be aware that photodiodes used to detect UV light can age quite significantly over time. For example, you could see the sensitivity of the device degrade and the dark current (or noise) of the detector increase. Hamamatsu has been perfecting its UV silicon photodiode process since the early 1970s and now achieves very low ageing characteristics (see figure 3). 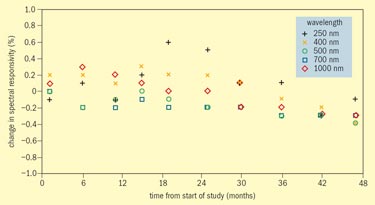 Applications that make use of UV-sensitive silicon photodiodes fall under two broad categories. The first is analytical applications such as UV-VIS spectrophotometers, DNA sequencers, blood and urine analysers, pollution monitoring and semiconductor inspection. The second is industrial and consumer applications including sun exposure meters, boiler flame monitors and water sterilization.

Imaging applications
Various versions of both vacuum tube and semiconductor technology are available for imaging applications. Image intensifiers (shown in figure 4) for example are based on the same photocathode and vacuum tube technology as PMTs, but instead of having an anode output, they use a microchannel plate (MCP) to multiply the photoelectrons onto an output phosphor screen. This gives a green image with very high signal-gain that is often associated with night-vision applications. UV sensitive intensifier tubes are used in a variety of specialized analytical and bioscience applications, often looking at very low levels of fluorescence.

Most consumer CMOS devices are not sensitive to UV light due to the silicon oxide layer on the surface of the semiconductor. However, as with silicon photodiodes, it is possible to modify the fabrication process to produce UV-sensitive CMOS image sensors.

Most commercial CCD products used for digital imaging are similarly not sensitive to UV radiation. Again, this is due to the presence of silicon oxides and polysilicon gate electrodes on the front surface of the sensor, which absorb UV and even blue light.

To produce a CCD that is sensitive to UV, light must enter the semiconductor from the rear (back) side. To maintain the image resolution, the silicon substrate must also be thinned to just 20 or 30 µm. This requires more complicated silicon processing and sophisticated handling and packaging of the delicate thinned wafer. These additional steps make the production of so-called "back-thinned" CCDs significantly more expensive than consumer-type visible CCDs. The benefits however are a sensor with a quantum efficiency much greater than 50% in the UV range and over 90% in the visible. Examples of back-thinned CCDs are shown in figure 5.

Many companies supply the various UV detectors outlined in this article. Hamamatsu Photonics manufactures all of the technologies described and can offer advice on the most suitable device for any application.