Continuous-wave optical parametric oscillators emitting multiple watts of output power in the near- to mid-infrared are now a commercial reality. Angus Henderson of Aculight discusses the technical advances that have resulted in a tunable source with a narrow linewidth. 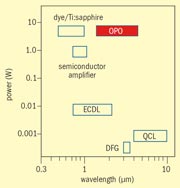 Progress in quantum cascade emitters and in nonlinear frequency conversion of solid-state lasers has brought continuous-wave (CW) sources operating between 2 and 10 µm to the point of commercial availability. To date, such sources have been limited to powers of tens of milliwatts and below. Now, however, thanks to advances in fibre laser pump sources, CW optical parametric oscillators (OPOs) that provide multiwatt output with wavelength coverage from the near- to mid-infrared (see figure 1) are on the market.

The availability of fibre laser pumped CW OPOs, which are comparable with dye or Ti:sapphire lasers in their capability for single-frequency operation, high-power level and broad tunability, is opening up new areas of scientific research and extending the possibilities for existing applications.

Tunable lasers and CW OPOs
Dye lasers were the first CW sources to be widely used in spectroscopic applications back in the 1960s providing watt-level CW output in the visible and near-infrared. When the Ti:sapphire laser arrived in 1988 with its relative ease of use and increased reliability, this all-solid-state source soon became a spectroscopic workhorse.

The wavelength coverage offered by these two sources however only spanned from the visible to around 1000 nm. Although these wavelengths allow many atomic transitions to be probed, some of the most important wavelengths in molecular spectroscopy occur in the mid-infrared between 2 and 20 µm where many small molecules have their fundamental absorption lines.

A more recent addition to spectroscopy laboratories is the external cavity diode laser (ECDL). Commercial devices are available in the near-infrared up to around 1700 nm, and very recently at wavelengths between 4 and 10 µm using quantum cascade technology. Semiconductor amplifiers can boost output powers into the watt level at some near-infrared wavelengths but in general ECDLs are restricted to output powers between 1 and 10 mW.

Although CW OPOs were first demonstrated in the 1960s, it was the development of quasi-phase-matched nonlinear materials (such as periodically poled lithium niobate [PPLN]) in the 1990s that led to practical configurations based on compact diode-pumped laser sources. The world's first commercial CW OPO appeared on the market in 2000 and was pumped by a 1.2 W diode-pumped Nd:YAG laser. With this input power, OPO output powers were below 100 mW and oscillation was obtained in a pump-enhanced configuration (by resonating both the pump and the signal in the cavity).

Today, the output power from commercially available CW OPOs has increased by more than an order of magnitude thanks to the emergence of fibre lasers and amplifiers. Fibre lasers provide the spectral and spatial characteristics needed to be an effective pump for a CW OPO, while also being rugged, alignment-free laser sources. The high power available from a fibre laser also eliminates the need to resonate the pump wavelength in the cavity to achieve oscillation, which in turn leads to stable single-frequency operation without complex locking electronics.

Aculight's Argos CW OPO (figure 2), which was released in 2007, is an example of a singly resonant OPO. In the Argos, a 15 W single-frequency fibre laser pumps the OPO in which the shorter "signal" wavelength is resonant and the longer "idler" wavelength exits the cavity on a single pass. Sufficient pump power ensures that high-power frequency conversion is achieved at both the signal and idler wavelengths. Multiwatt output powers are maintained over the tuning range from 1.46 to 3.9 µm, with the exception of a narrow (approximately 200 nm) gap at the degenerate wavelength of 2.1 µm. 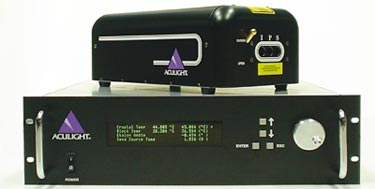 Cooling atoms
High-power CW OPOs are already in use at universities across the US, Canada and Europe. At Rice University in Houston, Texas, US, four groups of scientists are working on a diverse variety of applications. Because of the enormous wavelength range available from an OPO, each group operates the system at a waveband specific to its application.

For example, Tom Killian's research group is using laser-cooled atomic gases to study interactions between atoms at very low temperatures. The team is working in the ultracold chemistry regime and trying to produce exotic states of matter in which quantum mechanics dominates.

In future, Killian plans to use the OPO to promote atoms to excited states with strong anisotropic interactions, producing atomic ensembles with phase diagrams reminiscent of magnetic condensed matter systems. "The high power and broad wavelength tunability combined with the stable, singlemode output allows my lab to consider experiments that were not possible before," claimed Killian.

Detecting greenhouse gases
Another two researchers at Rice, Anatoliy Kosterev and Frank Tittel, collaborated on tests of prototype OPO systems. Their research focuses on advanced trace gas sensors for applications such as monitoring greenhouse gases and analysing breath for early and non-invasive detection of diseases.

QEPAS relies on measuring the amplitude of the sound wave that is generated when gas molecules absorb modulated light. The sound wave is detected using an extremely low-cost, compact, quartz tuning fork, such as those commonly found in digital watches. Kosterev's team recorded absorption spectra of ammonia and water vapour (see figure 4) at 2.8 µm, where ammonia shows strong absorption.

The Rice group, in collaboration with a team at Nijmegen University in the Netherlands, has since applied the QEPAS technique to trace ethane detection. Here, a CW OPO producing 300 mW at 3 µm detected ethane to 13 parts-per-billion. Using a new high-power system producing 3 W, Kosterev expects to improve the sensitivity by a factor of 10.

New frontiers
The wide wavelength tunability, narrow linewidth, and high power available from a CW OPO in a spectral region that is otherwise challenging to access makes it ideal for a variety of other applications. Research groups that have recently obtained systems are using them for an array of fundamental scientific studies including quantum computation, surface science, spectroscopy of helium nanodroplets, trace gas detection using cavity ring-down spectroscopy, and spectroscopy in supersonic jets of atoms.

In addition to these blue-sky research areas, the high-power levels and infrared wavelengths of the OPO are being applied to national defence. For the majority of defence applications, the ability to tune the operating infrared wavelength to an atmospheric "transmission window" (such that power is not lost to absorption by atmospheric components, including water vapour and carbon dioxide) is important.

The future
High-power CW OPOs using PPLN as the nonlinear material and 1 µm fibre lasers as the pump source are already enabling new applications in the 1.4–4 µm wavelength range. In the near future, we anticipate that the key advantages of CW OPO technology (high power, narrow linewidth and wide tunability) will be extended to cover other wavelength ranges – in particular the visible to near-infrared (400–1400 nm) and the longwave infrared (2–20 µm).

Recent improvements in the damage resistance of visible-transmitting nonlinear materials such as lithium tantalate have already allowed CW OPOs to operate stably down into the red part of the visible spectrum. Improvements in visible pump sources may soon enable even lower wavelengths in the green and blue part of the spectrum where applications include frequency metrology, flow cytometry and atom trapping.

At the longwave infrared end of the spectrum, new quasi-phase-matched nonlinear materials including orientation-patterned gallium arsenide (OP-GaAs) have been under development. Pulsed OPOs have already been demonstrated using this material, with a single device providing wavelengths from 2 to 10 µm. Significant investment is helping to improve the growth of OP-GaAs such that its quality will be consistent with CW operation.