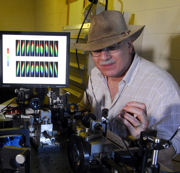 Ultrashort pulses have been measured in both space and time at and near a focus for the first time. The researchers hope that their technique will help scientists to detect and compensate for distortions at the pulse focus leading to better experimental results (Optics Express 15 10219).

"Having perfectly focused ultrashort pulses is important for many applications, especially microscopy and micromachining," Rick Trebino, a professor at the Georgia Institute of Technology, told optics.org. "We have achieved the first direct and complete measurement of focused ultrashort pulses, that is, the electric field (or intensity and phase) vs. all three dimensions in space and one in time."

Focused pulses nearly always have distortions that vary significantly from point to point in space due to lens aberrations in focusing optics. "Distortions caused by lenses and mirrors increase the focused spot size and the pulse duration, which significantly reduces intensity and spatial resolution," commented Trebino. "We can now measure how the pulse change as it propagates through a focus. This means that we can determine where the smallest spot size and shortest pulse duration occurs and the best point at which to use the pulse in an application."

Other pulse measurement methods developed by the group, such as FROG, can measure the pulse in time. Techniques such as STRIPED FISH or two-dimensional spectral interferometry can measure pulses in space and time, but cannot make this measurement at the focus. The group's latest device, known as 'SEA TADPOLE' can finally characterize ultrashort pulses both in 3D space and time as well as at the focus.

SEA TADPOLE stands for spatial encoded arrangement for temporal analysis by dispersing a pair of light electric fields. The technique involves analyzing the interference pattern created by the pulse of interest and a reference pulse that is already characterized. The reference pulse is measured using FROG or its simpler relative GRENOUILLE.

"We used a modelocked Ti:sapphire laser emitting pulses centred at 800 nm," explained Trebino. "Optical fibres with a diameter of 5.6 µm introduced the unknown and reference pulse and the resulting interference pattern is recorded with a digital camera. From here we can reconstruct the pulse's temporal intensity (the pulse shape in time) and phase (colour)."

So far the group has achieved a spatial resolution of around 1 micron, but hopes to improve this by using fibres with smaller diameters. "We would like to use fibres that are typically used for near-field scanning optical microscopy, which have diameters as small as 30 nm," concluded Trebino. "This will allow us to diagnose even smaller distortions in microscope objectives like those commonly used in multiphoton microscopy."