The development of the first hybrid InP-silicon laser by Intel and UC Santa Barbara could provide the breakthrough that silicon photonics is looking for.

Chip giant Intel has worked with researchers at UC Santa Barbara to develop a hybrid silicon laser that exploits indium phosphide as the gain medium and silicon as a light-router and waveguide. 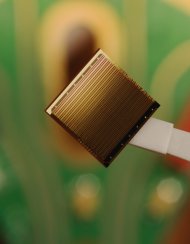 "We have combined the light-emitting properties of indium phosphide with the high-volume low cost capabilities of silicon and silicon photonics," said Mario Paniccia, director of Intel's Photonics Technology Lab. "This addresses one of the last major hurdles in silicon photonics, allowing the potential to produce hundreds of lasers in a single bonding step with no need for alignment."

Crucial to the design is a bonding process that "glues" the InP and silicon surfaces together. This was achieved by using an electrically charged oxygen plasma that creates a thin oxide layer on the surfaces of both materials. When pressed together, the oxide layer fuses the two materials into a single chip, and ensures that light generated in the InP gain medium travels through the transparent oxide layer and into the silicon.

The initial laser made by Intel emits at 1.58 µm, although this wavelength can be adjusted by modifying the silicon waveguides used. Full details of what the team claims is the world's first electrically pumped hybrid laser will be published in an upcoming issue of Optics Express.

According to Karen Liu, vice-president for communications components at the technology consultancy Ovum-RHK, this development signifies the latest in a series of announcements from Intel on the different tools that the firm is assembling to achieve rapid progress in silicon photonics.

"This is one building block and does not address full integration. For silicon-like full integration you need all these blocks plus a lot of work in assembling them together," Liu told optics.org.

"What this development does prove is that silicon lithography can now be applied to indium phosphide active devices. Although not yet competitive, the performance is far superior to what might be expected at such an early stage. It also opens up a series of device possibilities to explore."

In recent years, Intel has announced major breakthroughs in achieving laser light from a "pure" silicon photonic chip. In February 2004, the form announced the first gigahertz silicon optical modulator. A year later, Intel researchers published details of the first all-silicon laser using the Raman effect. "It is highly likely that hybrid InP-Si will move faster than the pure silicon laser, which is known upfront to be an extremely difficult approach," commented Liu.

However, one potential obstacle that the developers will have to address is the whether the laser is compatible with current CMOS technology. For instance, CMOS components are manufactured at around 600 degC, while the InP-Si integration is carried out at 300 degC.

"There are long-term compatibility issues that we will have to address. However, because this is a post-process and can be done at the back-end, it won't necessarily affect the other manufacturing processes," said Paniccia. "This is a research breakthrough. It's hard to foresee the problems that are going to arise with integration and testing."

Intel is one of a number of companies seeking the "holy grail" of a silicon photonics. US-based start-up Luxtera has pursued a similar approach to Intel by using both silicon and InP material, while Infinera is also developing an integrated photonics approach for telecoms applications.