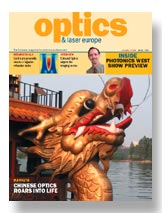 Think "Edmund Optics" and the words "catalogue firm" probably aren't too far behind. But, as president John Stack tells Jacqueline Hewett, there is a lot more to the company.

Materials that have a negative refractive index at optical wavelengths have now been fabricated by scientists in Europe and the US for the first time. Rob van den Berg explains why they could ultimately lead to new types of lens, antireflection coating and biosensor.

Key technologies to keep an eye on in 2006

Looking ahead over the next 12 months, the OLE team forecasts that slow light and polymer solar cells are two key technology areas that are likely to be regularly making the headlines. Here's an update on their status.

China turns its eyes to photonics to fuel growth

In mid-2005 the UK's DTI Global Watch Service sent a fact-finding mission to China to study its capabilities in electronics and photonics manufacturing. This is what they found.