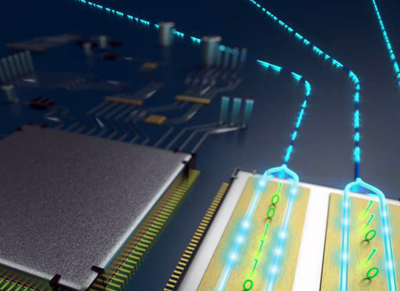 Researchers from City University of Hong Kong (CityU), Harvard University and Nokia Bell Labs have fabricated a tiny on-chip lithium niobate modulator, an essential component for the optoelectronics industry, around one hundred times smaller and more efficient than conventional LiNbO3.

The optoelectronic device will enable significantly faster data transmission but at a much lower cost, said the international team, adding, “This technology is set to revolutionize the optical communications industry.”

The modulator produced in this breakthrough research, just reported in Nature, is only 10 to 20mm long and its surface area is about 100 times smaller than previous LiNbO3 modulators.

the new device is also highly efficient—higher data transmission speed with data bandwidth tripling from 35 GHz to 100 GHz, but with less energy consumption and ultra-low optical losses. The invention will pave the way for future high-speed, low power and cost-effective communication networks as well as quantum photonic computation, say its developers.

Electro-optic modulators convert high-speed electronic signals in computational devices such as computers to optical signals before transmitting them through optical fibers. But the existing and commonly used lithium niobate modulators require a high drive voltage of 3 to 5V, which is significantly higher than 1V, a voltage provided by a typical CMOS (complementary metal-oxide-semiconductor) circuitry. Hence an electrical amplifier that makes the whole device bulky, expensive and high energy-consuming is needed.

Dr. Wang Cheng, Assistant Professor in the Department of Electronic Engineering at CityU and co-first author of the paper, and the research teams at Harvard University and Nokia Bell Labs have developed a new way to fabricate lithium niobate modulator that can be operated at ultra-high electro-optic bandwidths with a voltage compatible with CMOS.

Dr. Wang commented, “In the future, we will be able to put the CMOS right next to the modulator, so they can be more integrated, with less power consumption. The electrical amplifier will no longer be needed.” Thanks to the advanced nano fabrication approaches developed by the team, this modulator can be tiny in size while transmitting data at rates up to 210 Gbit/s, with about 10 times lower optical losses than existing modulators.

He added, “The electrical and optical properties of lithium niobate make it the best material for modulator. But it is very difficult to fabricate in nanoscale, which limits the reduction of modulator size. Since lithium niobate is chemically inert, conventional chemical etching does not work well with it. While people generally think physical etching cannot produce smooth surfaces, which is essential for optical transmission, we have proved otherwise with our novel nano fabrication techniques."

This latest invention is now on its way to commercialization. Dr. Wang believes that those who look for modulators with the best performance to transmit data over long distances will be among the first to get in touch with this infrastructure for photonics.

Dr. Wang began this research in 2013 when he joined Harvard University as a Ph.D. student at Harvard's John A. Paulson School of Engineering and Applied Sciences. He recently joined CityU and is looking into its application for the coming 5G communication together with the research team at the State Key Laboratory of Terahertz and Millimeter Waves at CityU.

"Millimeter-wave technology will be used to transmit data in free space, but to and from and within base stations, for example, it can be done in optics, which will be less expensive and less lossy," he said. He believes the invention can enable applications in quantum photonics, too. 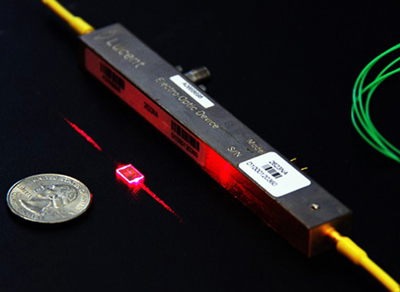 “This research demonstrates a fundamental technological breakthrough in integrated photonics,” said Marko Loncar, the Tiantsai Lin Professor of Electrical Engineering at SEAS and senior author of the paper. “Our platform could lead to large-scale, very fast and ultra-low-loss photonic circuits, enabling a wide range of applications for future quantum and classical photonic communication and computation.”

Harvard’s Office of Technology Development has worked closely with the Loncar Lab on the formation of a startup company, HyperLight, that intends to commercialize a portfolio of foundational intellectual property related to this research.

Preparing the technology towards the launch of HyperLight has been aided by funding from OTD’s Physical Sciences & Engineering Accelerator, which provides translational funding for research projects that show potential for significant commercial impact.

“Highly-integrated yet high-performance optical modulators are very important for the closer integration of optics and digital electronics, paving the way towards future fiber-in-fiber-out opto-electronic processing engines,” said Peter Winzer, Director of Optical Transmission Research at Nokia Bell Labs, the industrial partner in this project, and coauthor of the paper. “We see this new modulator technology as a promising candidate for such solutions.”