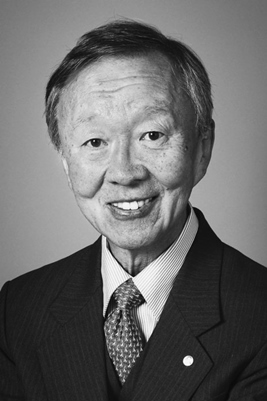 Charles Kao, the pioneering Chinese electrical engineer who played a critical role developing the optical fibers on which the internet is built, has died at the age of 84.

In 2009 Kao won a half-share of the Nobel Prize in Physics for his groundbreaking work - specifically, calculating that high-purity glass fibers would be able to transmit light signals further than 100 km.

Prior to that, the practical limit had been only 20 meters. Just a few years after Kao published his calculations, the first ultra-pure optical fibers were being manufactured, ultimately leading to the construction of long-range optical communications networks alongside laser transceivers and erbium-doped fiber amplifiers to regenerate the optical signals over even longer distances.

UK studies
Born in Shanghai in 1933, Kao grew up in turbulent times including the Japanese invasion of China and subsequent civil war. After first moving to Hong Kong, in 1953 he emigrated to the UK - learning quantum mechanics on the long boat trip - before graduating from the Colleges of London University with a degree in electrical engineering.

After that, Kao spent three decades working in different locations for International Telephone & Telegraph (ITT) – becoming an “executive scientist” at the company in 1982, just as the optical networking industry was taking off.

And it was while working at ITT’s UK subsidiary Standard Telephones & Cables (STC) that Kao published the seminal 1966 paper entitled “Dielectric-fibre Surface Waveguides for Optical Frequencies” that resulted in the physics Nobel some 43 years later.

In his autobiographical notes published by the Nobel Foundation, Kao wrote that the research was to “spawn a whole new industry over the next 20 years”, adding:

“People asked me if the idea came as a sudden flash, eureka! I had been working since graduation on microwave transmissions. The theories and limitations were ground into my brain. I knew we needed much more bandwidth and thoughts of how it could be done were constantly in my mind.

“Transmission of light through glass is an old, old idea. It had been used in past years to shine light for entertainment, for decoration, for short distances for surgery, through a glass rod, but it had not been possible to use it over the long distances required for telephony.

“Light passing through a rod of glass just fades out to nothing after a very short distance of a few feet. Efforts by many research laboratories to find a way to transmit light over long distances were desperate as the public, prompted by media reports of hopeful technical advances, were expecting more and more exotic services.

“I played around with what was causing the failure of light to penetrate glass. With the invention of the laser in the 1950s and subsequent developments, there was an ideal source of light that could send out pulse of light in a digital stream of noughts and ones, represented by off and on states of the pulse.

“Ideas do not always come in a flash, but by diligent trial-and-error experiments that take time and thought.”

Terabit technology
Several years after the 1966 breakthrough, while at ITT’s Advanced Technology Center in Connecticut, Kao headed up the Terabit Optoelectronics Technology Project – a consortium of ten universities and institutions intended to reach transmission speeds three orders of magnitude faster than the state-of-the-art at the time.

Shortly after being appointed ITT’s director of corporate research in 1985, the company sold its European telecommunications business to Alcatel’s Alsthom subsidiary, which subsequently merged with Lucent Technologies to form the giant Alcatel-Lucent, itself then acquired by Nokia in 2016 to form part of today’s Nokia Networks.

Aside from the 2009 Nobel, Kao won SPIE’s Gold Medal of the Society in 1992, along with the IET’s Faraday Medal in 1989, and both the IEEE’s Alexander Graham Bell Medal and the Marconi Prize in 1985.