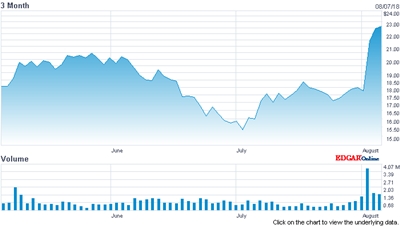 The stock price of laser microfabrication systems firm Scientific Industries (ESI) has risen sharply after it reported another strong set of financial results.

For the three months ending June 30, the Portland, Oregon, company delivered a net income of $31.1 million on sales of $110.6 million. And while orders from the semiconductor industry have slowed in the latest period, CEO Michael Burger reported a “dramatic” increase in demand for tools used in specialist test equipment for ceramic components.

That prompted an immediate 15 per cent jump in ESI’s stock price when the results were announced last week – a rise that has been sustained with further increases since then.

Laser drilling
Burger told investors: “The technology trends toward the need for precision laser processing and component test within the consumer electronics and automotive markets have enabled us to post a strong start to our fiscal year, with 52 per cent year-on-year revenue growth and excellent overall financial performance.”

The CEO added that demand for ESI’s laser drilling tools – used in the production of flexible circuits that feature in smart phones and various consumer electronic devices – had softened, as customers absorbed “massive amounts” of capacity that the firm has shipped over the past 18 months.

That trend is evident in ESI’s past two sets of full-year results, with overall sales more than doubling from $161 million in its fiscal 2017 to $368 million in fiscal 2018.

With a portfolio of microfabrication systems based around both carbon dioxide and solid-state lasers, the ESI team says that it sees major opportunities emerging in new applications where flexible circuits are used.

In an investor conference call to discuss the latest results, Burger cited 5G networking and automotive radar as key areas to watch as ESI looked to launch a new drilling tool based around an ultraviolet laser.

“We are proactively working with a broad set of customers and material suppliers to ensure their material and process road maps align with the capabilities of our next-generation laser tool,” said the CEO, adding that ESI was on track to launch the new system for flexible circuit drilling later in the summer.

“With materially improved throughput and accuracy, this platform is expected to further raise the performance bar for UV-based laser drills,” he claimed, with several tools recently shipping to beta customers and further shipments and launch activities planned during the current quarter.

Semiconductor softness
The only slight downside at the moment appears to be the semiconductor sector, where ESI sells tools used to scribe, mark, and trim silicon wafers. Bookings here have taken a recent dip, while semiconductor-related sales of $18.8 million were down from $22.4 million in the March quarter but up very strongly from just $5.2 million a year ago.

Looking ahead, Burger said: “I’m pleased to see the same technology trends toward connected devices, automotive and 5G that led to strong demand for flex products have now resulted in increased demand for our MLCC [i.e. ceramic component] test tools, strengthening our belief that overall company demand will remain above historical levels for the foreseeable future.”

The CEO is anticipating sales of between $80 million and $90 million in the current quarter, and is hopeful of penetrating the market for high-density interconnect (HDI) production with a new laser drilling tool scheduled for launch by the end of this year.

“Penetrating the HDI market is one of our key growth initiatives as it represents a large and growing market where, today, we virtually have no market share,” Burger said. “By leveraging the key technical capabilities demonstrated in our flex drilling tools, we remain convinced that our next-generation tool will differentiate us in the HDI space, which will enable us to grow share.”

• Now trading at around $23 on the Nasdaq index, ESI's stock price has more than doubled in value over the past 12 months, but is down slightly on short-lived highs of around $27 reached in both January and November 2017.