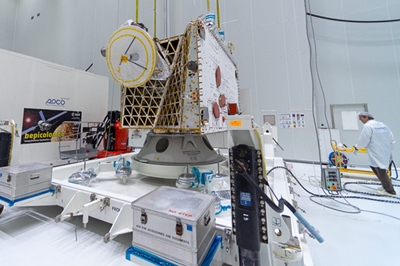 by Ford Burkhart in San Diego
Benefits to science – and to Earth itself – from the scheduled October 19 launch of a Euro-Japanese mission to the planet Mercury energized a technical session at the SPIE Optics + Photonics symposium in San Diego.

Scheduled to reach the planet in 2025, the BepiColombo probe - named for the Italian mathematician and engineer Giuseppe Colombo - will carry several spectrometers into orbit around the Sun’s nearest planetary neighbor. Its payload includes thermal imaging and ultraviolet spectroscopy equipment, as well as a laser altimeter.

Jörn Helbert, co-principal investigator for the “MERTIS” thermal imaging instrument on board, is a researcher from the German Aerospace Center (DLR) in Berlin, Germany. He discussed the details during the “planets and minor bodies” session within the wider conference track covering instrumentation for infrared remote sensing.

Planet formation
The mission, jointly co-ordinated by the European Space Agency (ESA) and the Japan Aerospace Exploration Agency (JAXA), will provide global maps of Mercury, along with details of composition and temperatures.

“Mercury is the inner-most planet in solar system,” Helbert said. “It will help us understand how our solar system was formed - and any other one. It’s a model exoplanet in our system. We now have hundreds of exoplanets discovered, while [we knew of] none just 20 years ago.”

Recent discoveries of both small, rocky exoplanets and gas giants in a variety of unexpected orbits around distant stars have forced astronomers and astrophysicists to re-think earlier theories about planetary formation and evolution – something that BepiColombo should help shed some light on.

Chairing the technical session, Marija Strojnik-Scholl from the Optics Research Center in Leon, Mexico, predicted that details about the mysterious composition and geophysics of Mercury – one of the solar system’s lesser-studied bodies - could be crucial to the Earth and its inhabitants.

“This is exciting,” said Strojnik-Scholl. “We’ll get to know the mineral composition of the surface, and maybe find minerals the Earth needs. Yes, science is beautiful, but when that wears off, we can find things useful to humanity - perhaps gold needed by the semiconductor industry. We could learn about things fused into a matrix in a different way.”

Helbert added: “This could change our whole idea of planetary systems. Life in the universe was considered very unlikely. Now [with exoplanet discoveries] we see that having planets is the norm and not the exception in the universe. Statistically, the idea of life goes up.”

Delicate operations
However, just like the recently launched Parker Solar Probe, operations for the Mercury-bound spacecraft will face huge challenges from the heat of the relatively nearby Sun. “It’s like it’s in a toaster,” Helbert said.

On one side of the craft, the Mercury surface is itself very hot - 450° Celsius, during the 250 km orbits. Needless to point out, on other side will be the Sun. “Operations will be very delicate,” added Helbert.

Weighing just 3 kg, MERTIS is an imaging spectrometer designed to capture hyperspectral data in the thermal infrared wavelength range, in order to determine the minearological composition of Mercury’s surface.

According to the DLR team that designed the instrument, an uncooled microbolometer array will provide spectral separation across 80 wavelength channels and a spatial resolution of 280 meters while operating close to room temperature.

The range of the MERTIS spectrometer covers 7-14 µm, although the associated radiometer extends that reach out to 40 µm. The operating principle is based on intermediate scanning of the planet’s surface and three different calibration targets - namely deep space, and two on-board black-body sources.

In a session broad on scope, Helbert also updated attendees on the OSIRIS REx mission - now just starting its final approach towards the asteroid Bennu, and scheduled to arrive in early December – as well as the future Lucy and Psyche probes to asteroids, intended to help explain the origin of planetary cores.