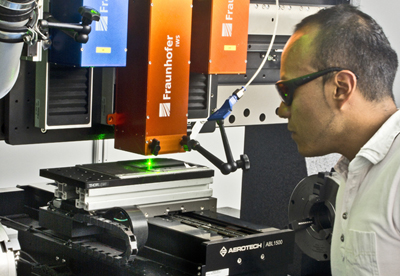 Filigree engravings on external surfaces of aircraft are intended to ensure that airflow remains smooth and drag on the aircraft low. For this, engineers at the Fraunhofer Institute for Material and Beam Technology, the Technische Universität Dresden and Airbus have developed a laser process that produces textured surfaces at high throughput - increasing resistance to surface contamination.

The project has received funding from the European Union’s Horizon 2020 research and innovation programme under the Marie Skłodowska-Curie grant agreement No 675063. Any work or result described in this deliverable is either genuinely a result of LASER4FUN project. The European project “Laser4Fun”, in which Fraunhofer IWS and Airbus are collaborating, aims to achieve nanostructures on selected surfaces of aircraft to repel dirt and water.

“With our process, we want to prevent any form of contamination on aircraft surfaces,” said Dr. Tim Kunze, who heads the Group Surface Functionalization at IWS. “But it would also be a success if we could at least reduce it considerably.” This can be done for instance using micro- and nanostructured surfaces.

However, the current state of the art is that the structuring needs to be combined with other technologies. Not so for the IWS solution. To understand what the Fraunhofer engineers have used for developing the water- and contamination repellent concept think of a simple physics experiments from high-school: a beam of light passing a double-slit forms a periodic pattern of bright and dark lines – a so-called “interference pattern”.

As a result, Fraunhofer and TU Dresden scientists have produced microstructures over the titanium surface. Viewed under a microscope these resemble microscopic halls of pillars or corrugated iron roofs. The distances between the pillars can be set precisely between 150nm and 30μm. Through the nano- and microstructures on the metal, water droplets can no longer wet the surface and stick to it. This structure is a mimic from nature and has long been known as “lotus effect”.

Previously, “lotus-like” nano- and microstructures could be produced by laser technology, but only very slowly: a laser beam had to engrave each groove or column in succession. That would take too long for a large airfoil, for example. Thanks to the new DLIP interference technology, the Fraunhofer and TU Dresden researchers have been able to significantly increase the processing speed: depending on whether titanium, polymers or other materials need to be structured, the DLIP optics can now treat almost one square meter per minute.

“This speed is a world record,” emphasized Prof. Andrés Lasagni, who laid the cornerstone of the working group at Fraunhofer IWS up to 2017 and now holds the professorship for laser-based methods for large-scale surface structuring.

“Together with our colleagues from IWS, we have developed the largest DLIP system worldwide, now located at the TU Dresden. This system, which was supported by the Excellence Initiative of the German Research Foundation, facilitates the treatment of large areas at high throughput. In addition, the DLIP laser heads can be integrated into standard industrial machines allowing even medium-sized companies to access this technology.” 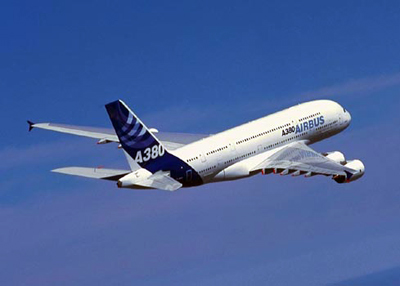 All this recommends the new technology developed jointly by Fraunhofer IWS and TU Dresden for the aerospace industry. Airbus engineers are currently flight-testing laser-structured coatings on an aircraft wing. “We have provided a titanium test surface with our columnar structure,” said Tim Kunze.

“Our colleagues at Airbus have added a chemical treatment to the coating and fixed it to the leading edge of a wing.” Now the DLIP-produced coating must show its potential in real-life cases.

Elmar Bonaccurso, Material Scientist at Airbus Central R&T, commented, “Flight-testing in various operating conditions and coating inspections at regular intervals are especially useful for investigating the durability and functionality of such water and contamination repellent coatings that have already shown to perform very well in the laboratory.”

Meanwhile, Dresden-based Fraunhofer and TU Dresden engineers are already researching other applications for their Lotus-like nanostructures. Not only are they able to generate water-repellent surfaces, but also to ensure that water or other liquids wet selected areas, thus becoming “hydrophilic” or “lyophilic”.

Hard-to-copy security seals can also be generated by this method. This technology could be used, for example, to mark forgery-proof license plates or to increase the bio-compatibility of dental implants. “Properly structured implant screws could be better accepted by the body,” Prof. Lasagni commented. “And that would mean fewer complications for the patient.”