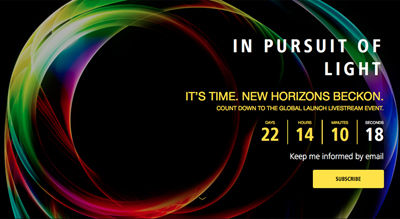 Camera maker Nikon has developed what it is calling a next-generation full-frame ("Nikon FX-format") mirrorless camera and Nikkor lenses featuring a new mount. The new camera is scheduled for launch on 23 August in Tokyo with the company’s US website currently displaying a digital clock counting down the seconds to lift-off.

The company says that the camera equipment under development “will enable a new dimension in optical performance with the adoption of a new mount. The system is the result of Nikon's optical and manufacturing capabilities gained through more than a century of imaging experience.”

The combination of full-frame sensor (maximising an image’s megapixel count and therefore quality in terms of size, detail, color range, sharpness and so on) and mirrorless shutter (meaning a faster frame rate and minimal motion shock) is one of the current hot competition points between the major camera manufacturers.

In April 2018, Nikon rival Sony launched its full-frame A7 III to extend its mirrorless camera range, which features a backside-illuminated 24.2-megapixel sensor with 5-axis optical image stabilization. And the camera media, such as independent product review publisher Which, are widely reporting that Canon is also planning to release two mirrorless full frame DSLR models before the end of 2018.

This consumer marketplace for high performance cameras is more hotly contested than ever with the advent of high performing phone cameras challenging the traditional camera makers.

Through the development of this new mirrorless camera, Nikon says it is “reaffirming its commitment to providing photographers with the ability to capture images that are richer and more vivid than ever before.”

Nikon is also developing an F-Mount adapter that will enable the use of a wide variety of F-Mount NIKKOR lenses with the new camera, commenting: “Soon, Nikon users will have two industry-leading camera systems to choose from, giving consumers the choice to enjoy the unique values that each system offers.”