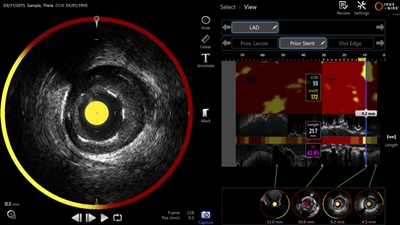 Massachusetts-based Infraredx, a subsidiary of the major Japanese medical equipment firm Nipro, has announced that its hybrid ultrasound/infrared (IVUS+NIRS) system for imaging blocked coronary arteries is now available in Japan.

Following a limited release across a small number of Japanese hospitals earlier this year, the “Makoto” intravascular mapping system is said to help cardiologists carry out specific interventions for individual patients.

Infraredx CEO Jason Bottiglieri claimed in a company release: “IVUS+NIRS technology has the potential to dramatically change the field of interventional cardiology. Two unique modalities in one catheter provide cardiologists twice the information of other imaging catheters, helping to inform personalized treatment decisions.”

The catheter-delivered imaging tool is said to exploit the dual modality approach by both mapping the shape of blocked blood vessels and identifying the chemical composition of the plaque creating the blockage. Japan’s Pharmaceuticals and Medical Devices Agency (PMDA) approved the technology in August 2017.

That information is combined with near-infrared spectroscopic (NIRS) data and translated into a color-coded map to identify lipid core plaque (LCP) features. That information can help cardiologists distinguish between stable and dangerous plaques inside a patient’s arteries.

“Coupled together, IVUS+NIRS arms cardiologists with unparalleled insights into the role LCP plays in heart disease,” states Infraredx, referencing a number of clinical trials of the technology that underscore the importance of identifying LCP to predict and prevent serious heart attacks.

International trial
Results from a major multi-center trial known as the lipid-rich plaque (LRP) study are expected before the end of this year – by which time the Makoto imaging system is likely to have been launched in the US.

The four-year LRP study, which has involved more than 1500 participants across 39 hospitals and clinics in the US and Europe, is designed to determine whether or not NIR spectroscopic analysis of the fatty, cholesterol-rich plaques inside arteries is able to predict future events such as heart attacks.

“If dangerous plaques can be identified, there are many treatments already available that could be tested for their ability to prevent coronary events,” states the project summary. Scheduled for completion in April 2018, the study is led by principal investigator and cardiologist Ron Waksman from the Medstar Heart Institute in Columbia, Maryland.

• Meanwhile two other US companies have joined forces in a bid to develop a laser system for treating blocked coronary arteries. As part of the deal to develop a “laser atherectomy” device, Minnesota-based Cardiovascular Systems, Inc. (CSI) has taken an equity stake in New York’s Aerolase.

While there is currently insufficient evidence to suggest that atherectomies are any more effective than conventional balloon stents for preventing cardiovascular events like heart attacks, CSI and Aerolase say that they aim to “create a significant improvement in the quality of care for patients suffering from peripheral arterial disease and in-stent restenosis [i.e. a blocked stent]” by adapting lasers currently used in dermatology and aesthetic clinical applications including acne treatment and wrinkle reduction.

[* update August 6]: the image accompanying this article has been updated.