Defense systems company Raytheon, has announced that it is developing a 100 kW class laser weapon system preliminary design for integration onboard the family of so-called “Medium Tactical Vehicles”. This development is component of a $10 million US Army High Energy Laser Tactical Vehicle Demonstration program contract. HEL TVD, a US Army science and technology demonstration program, is part of the Army's Indirect Fire Protection Capability Increment 2 initiative.

"The beauty of this system is that it's self-contained," said Roy Azevedo, VP of Intelligence, Reconnaissance and Surveillance Systems at Raytheon's Space and Airborne Systems business unit. "Multi-spectral targeting sensors, fiber-combined lasers, power and thermal sub-systems are incorporated in a single package. This system is being designed to knock out rockets, artillery or mortar fire, or small drones." 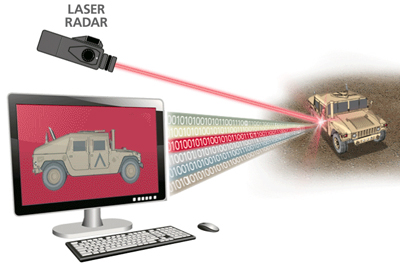 Raytheon's method for delivering real-time data from a laser radar.

Announced a few days before the 100kW laser news, the company reported that a Raytheon optical engineer Joe Marron has developed a new way to collect real-time readings from large laser radars, which use reflected light to measure speed and distance. Through Raytheon, he applied for a patent, and now three years later, he has received it.

Not only did it confirm that his idea for delivering real-time data from a laser radar to military assets such as vehicles was novel, it made him the inventor behind the 10 millionth patent in the history of innovation in the United States. The development also led to a special presentation of the patent certificate by US President Donald Trump (see below).

Raytheon noted that “the odds of securing such a significant patent number are long, but they improve when you consider Marron's achievements and Raytheon's history of innovation; Marron has turned his ideas into more than 20 patents over the years, starting with a 1991 concept to improve upon bifocal lenses.” The company holds more than 13,000 active patents – 4,500 in the US alone.