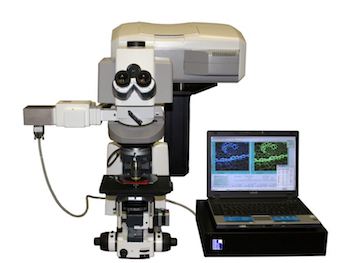 FLIM with a larger field of view

Laser-scanning fluorescence lifetime imaging microscopy (FLIM) is a promising approach to imaging biological systems, employing the differences in decay rates of fluorophores within a sample to compute an image.

Using the lifetime, rather than the intensity, of the fluorescence signal to create imaging data has the advantage of countering scatter in thick samples and being independent of fluorophore concentration, but to date the technique has been limited to relatively small fields of view, typically below one millimeter.

A project from Berlin-based instrument vendors Becker & Hickl and Russia's Privolzhsky Research Medical University has developed a FLIM platform that allows imaging of samples as large as 18 millimeters, a potentially significant step on the path to clinical suitability for the process.

This is the first confocal macro-FLIM system that has a relatively high spatial resolution and molecular specificity at the same time, according to the team. The work was reported in Optics Letters.

"Our macro-FLIM system can not only obtain a sample’s structural information, but also allows observation of certain biochemical processes taking place within the sample," said Vladislav Shcheslavskiy of Becker & Hickl. "Although our goal is to develop this for clinical use, it could also be very useful in fundamental studies such as probing biological processes during disease development, or investigating biological responses to different types of therapy."

The macro-FLIM platform uses two galvanometer mirrors to scan the laser beam, and a design of spectral and polarization components to allow a maximum image area of 18 millimeters in the image plane, with a laser spot size of 15 microns.

In the OE paper, the team note that the numerical aperture in the focus of the scan lens is larger than for the laser beam, meaning that full-size images could, in principle, be reasonably scanned with at least 1024 × 1024 pixels, or even more by moderate oversampling. This could ultimately allow the same design to perform FLIM of centimeter-size objects.

In trials, the platform was first used to image fluorescent microbeads 14.6 microns in diameter, and live cultured cancer cells labeled with fluorescent dye, before applying the macro-FLIM to analysis of an entire tumor in a live mouse.

This in vivo analysis was achieved by simultaneously measuring the fluorescence lifetime of a genetically encoded red fluorescent protein named mKate2, which identified the location of the tumor, and nicotinamid adenine dinucleotide (NADH), a molecule responsible for energy production in living cells.

"The collected signal clearly identifies the location of the tumor in the animal body by mKate2 fluorescence, and its metabolic heterogeneity by fluorescence of NADH," noted the team in its published paper. "These experiments can be extended to interrogate both metabolism and oxygen status of tumors on a macroscale."

Developing the macro-FLIM platform for clinical use will require further improvements to its flexibility and mobility, which the project will now tackle.

"The sensitivity of our system was high enough to observe fluorescence of intrinsic tissue components such as NADH without any labeling," said Shcheslavskiy. "In addition to being used to study metabolism in a tumor, macro-FLIM could be used to follow cell death or oxygen status of tumors on a macroscale with cellular resolution."