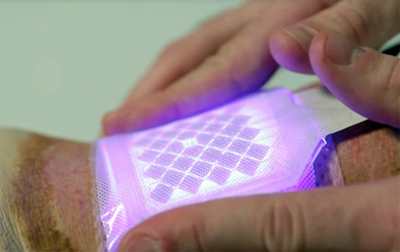 Patched up: Blue light is known for its anti-microbial, anti-inflammatory effects.

With the objective of using light to improve wound healing and within the framework of the European project MEDILIGHT, Swiss company CSEM and six partners have developed a new solution for treating chronic wounds. This portable device delivers blue light to improve and accelerate the healing process. The prototype was first presented this week at the project wrap-up event on July 2nd, at the URGO Laboratories in Dijon, France.

Chronic wounds are often difficult to treat, because they do not follow the typical injury healing process or time-frame. The resulting burden is significant, affecting over 40 million patients worldwide and costing healthcare systems an estimated €40 billion annually.

Blue light is known for its anti-microbial and anti-inflammatory effects in the initial stages of the healing process; it does not damage tissue, unlike the hazardous UV light. However, clear evidence of the beneficial effects of blue-light irradiation in the later stages of wound healing was still missing, thus hindering the development of effective solutions for complete therapy.

With six other partners, CSEM has helped to address this gap through the European project MEDILIGHT. Thanks to this collaboration, it has been demonstrated that blue-light illumination can offer much more than just antibacterial effects.

The anti-proliferative functionality has now been clearly proven, showing that blue light prevents an overshooting epidermization in premature healing stages. The consortium has also shown for the first time that blue light can efficiently activate key cutaneous cells, i.e. keratinocytes and fibroblasts with another appropriate light dose and thereby accelerate the final wound-healing process.

The prototype is an ideal solution for a smart, wearable system for blue-light treatment of chronic wounds, such as diabetic ulcers. It further paves the way for the potential future commercialization of devices based on light therapy for monitoring wound healing. Such an application is just one example of the new opportunities created by this project, as the MEDILIGHT approach could also target other medical issues in the future. 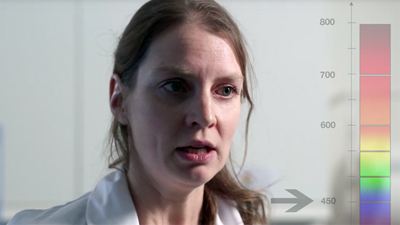 “With the discovery and demonstration of the efficacy of blue light in both antibacterial functions and the activation of key cutaneous cells, MEDILIGHT has allowed URGO to file two fundamental patents,” explains Marielle Bouschbacher, the project’ leader at URGO.

“MEDILIGHT also opens the way for other important application opportunities that will address unmet needs, such as the disinfection of medical instruments and operating environments.” It is important to note that MEDILIGHT was initially a human adventure. Several teams, several countries, and several skill-sets have joined forces to achieve a single goal: to create innovative healthcare solutions for tomorrow.