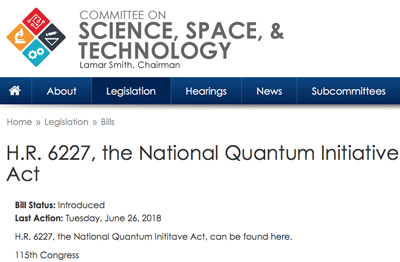 The US Government’s Bipartisan Senate Committee on Commerce, Science and Transportation has formally introduced the National Quantum Initiative Act (H.R. 6227) in the US Senate. SPIE, the international society for optics and photonics and publisher of optics.org, welcomed the legislation, which paves the way towards a program of funding and research into this photonics-heavy innovation sector.

At the same time, the House Committee on Science, Space and Technology approved the National Quantum Initiative Act. An amendment to promote access to existing quantum computing and communication systems for users was added during markup (the refinement and approval process), a provision called for by the National Photonics Initiative – which has been working on this legislation since 2017 and of which SPIE is a founding member – and supported by the stakeholder community in a letter to committee Chairman Lamar Smith (R-TX) and Ranking Member Eddie Bernice Johnson (D-TX) earlier last week.

The NPI followed up its 2017 white paper, with a National Quantum Initiative Action Plan in April this year.

The legislation will accelerate research by establishing the National Quantum Initiative Program to speed quantum research and development over the next 10 years; establish interagency coordination by authorizing a National Quantum Coordination Office and an interagency Subcommittee on Quantum Information Science at the White House Office of Science and Technology Policy; support quantum information science research, measurement, and standards development, including a five-year authorization of $80 million per year; establish research and education centers, including a five-year authorization of $50 million per year; and encourage private sector involvement.

"This is a terrific step forward for organizations involved in the National Photonics Initiative and for America's position as a world leader in technology and business," said SPIE CEO Kent Rochford. "Quantum technologies are moving from the research stage into development and engineering, and will create entirely new industries and opportunities for innovation. By working to implement a bipartisan, comprehensive national policy today, these Senate and House committees just moved a critical needle in the right direction. We now encourage Congress to work to appropriate the new funding needed to make these goals a reality."

"Under the leadership of Chairman Lamar Smith and Ranking Member Eddie Bernice Johnson, the House Science, Space, and Technology Committee has been at the forefront of the effort to create a quantum framework that will maintain our nation's status as a research and economic leader in this important field," said Edward White, Chair of the National Photonics Initiative Steering Committee and Vice President of Test, Assembly and Packaging for AIM Photonics.

"The introduction and approval of the National Quantum Initiative Act represents a significant step in advancing our nation's quantum research capabilities and creating the workforce necessary to sustain that development over the long term. We look forward to working the Science Committee and the broader House to advance this important legislation."