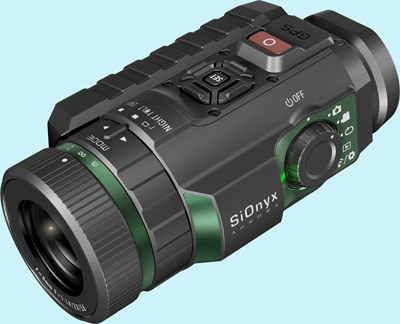 Aurora is based on SiOnyx’s Ultra Low Light technology.

SiOnyx, based in Beverly, MA, a developer of infrared imaging technology has launched the Aurora, which it claims is the only HD action video camera with true day and night color imaging. The camera made its public debut at the Outdoor Retail Show, in Denver, CO, which concludes today.

Available in August, direct from SiOnyx for $799, the Aurora, which weighs 8 ounces (225g) and fits in one hand, is based on SiOnyx’s patented Ultra Low Light technology. The company claims such low-light performance was previously only available “in the highest-end night vision optics costing tens of thousands of dollars.”

SiOnyx has developed a new semiconductor process that enhances the infrared sensitivity of silicon-based imaging. Its ultra low-light technology enables richly-defined color images and video during the day and twilight, combined with unmatched high-resolution viewing in near total darkness.

Through the free companion apps on iOS and Android, users can review their experiences in real-time or control the Aurora directly from a smart phone. The camera is also designed for active outdoor use: the camera is certified with an IP67 waterproof rating.

Suggested uses include “boating, hunting, fishing, nature watching, emergency response and other activities where clear night-vision is of importance. The Aurora uses GPS combined with an accelerometer and compass to accurately guide users, in day or night time.

SiOnyx was founded in 2006 by Professor Eric Mazur and Dr. James Carey of Harvard University. The company has commercialized a patented semiconductor process that dramatically enhances the sensitivity of silicon-based photonics.

SiOnyx’s platform is said to represent a significant breakthrough in the development of smaller, lower cost, high-performing photonic devices in applications ranging from simple light detection to advanced digital imaging and more. The company markets its low-light technology under the XQE family of CMOS images sensors and has also entered the consumer electronics market with the launch of the Aurora day/night action camera.