Tipped for a future Nobel prize, the University of Ottawa professor has landed the Institute of Physics' highest accolade. 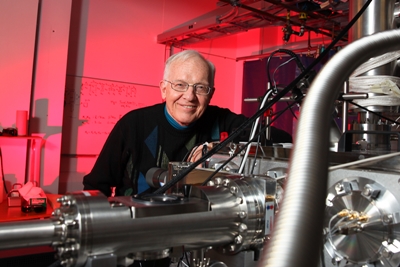 The University of Ottawa, Canada, professor - tipped in 2014 by citation experts Thomson Reuters for a future Nobel prize - was part of the team that in 2001 developed the first optical system capable of producing sub-femtosecond duration pulses of light, opening the door to so-called “attosecond science”.

“This award recognizes and honors Professor Corkum’s world-leading contributions to experimental physics and to attosecond science - from the femtosecond scale of the motion of atoms within molecules, to the ultimate attosecond scale of the motion of electrons within atoms - and for pioneering work which has led to the first ever experimental image of a molecular orbital and the first ever space-time image of an attosecond pulse,” announced IOP.

Quantum 'magic'
Collaborating closely with the likes of Ferenc Krausz and his Vienna University of Technology team, Corkum’s research has delivered ever-shorter pulses of light. In doing so, explains the learned society, he has connected two previously unconnected cornerstones of physics; the link providing a spatial dimension to optics that will eventually lead to real-time measurements of collisions within an atomic nucleus.

“Thanks to the magic of quantum physics, an intense laser field removes part of an electron from a molecule and then interferes with its alter ego that remains in the molecule,” stated an IOP release announcing Corkum’s win.

“This new approach permits the imaging of the structure of molecules using the re-colliding electron, thereby allowing the observation of chemical reactions as they occur, and observing the rearrangement of electrons on the attosecond time-scale.

“These techniques are key to understanding photochemical processes such as photosynthesis, the mechanism of vision, and the photo-stability of DNA.”

Responding to news of the prize Corkum referenced Newton, saying: “It was with Newton’s laws of motion and of gravity that I began to learn the tools of my profession in high school. My most famous papers introduced the theory of attosecond pulse generation - Newton’s laws of motion are at the very heart of this model and the edifice of attosecond science rests on them. Therefore it is the highest possible honor for me to receive the Isaac Newton Medal and Prize.”

He also predicted that although he is the first Canadian scientist to be awarded the IOP’s top prize, he would not be the last. “It is a wonderful time for science in Canada,” added Corkum, who will visit London to deliver the Newton Lecture at a date to be confirmed. 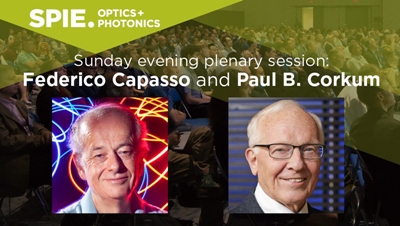 San Diego plenary talk
But before that happens attendees at SPIE’s forthcoming Optics+Photonics symposium in San Diego, California, will get their chance to hear from Corkum, who is scheduled to deliver the opening plenary talk at the event Sunday August 19. SPIE, which owns optics.org, awarded its 2018 Gold Medal to Corkum earlier in the year, and this award will be presented at the conference.

Entitled “Attosecond pulses generated in gases and solids”, the San Diego talk will cover the extraordinary advances in metrology that attosecond science is set to make possible.

One of Corkum’s key contributions to the field of attosecond science was to develop and test the very first model explaining the process of high-harmonic generation, known as “Corkum’s three-step model”. Much-cited publications in scientific journals including Science and Nature followed in due course.

Corkum’s work describes how attosecond pulses are generated by electrons that are extracted from a quantum system by an intense light pulse, and travel through the continuum under the influence of the electric field of the light.

Portions of each electron wavepacket are forced to re-collide with its parent ion after the field reverses direction. Upon re-collision, the electron and ion can recombine, emitting soft x-ray radiation that can be in the form of attosecond pulses.

The highly nonlinear process occurs in atoms, molecules and solids, providing ways to measure the attosecond pulse itself, as well as the orbital from which it emerged, and the band structure of material in which the wavepackets moved.

Moore’s law for optics?
Also on the opening plenary roster in San Diego will be Harvard University professor Federico Capasso, who himself won SPIE’s Gold Medal Award back in 2013.

Capasso’s talk will outline what the metamaterials and quantum cascade laser pioneer envisions as the future of digital optics and the potential for the field to follow the lead of the semiconductor industry with ever-shrinking components and increased functionality.

“It is tempting to speculate that an empirical law might govern its growth, akin to Moore's law for digital electronics,” states Capasso in his abstract describing the talk.

The event-wide presentations by Corkum and Capasso will be complemented later in the week with conference-themed plenaries on topics including OLED TVs (from Korean electronics giant LG Display), smart windows, and remote satellite sensing of weather and climate.

• For full details of the SPIE Optics+Photonics schedule visit the dedicated web site.