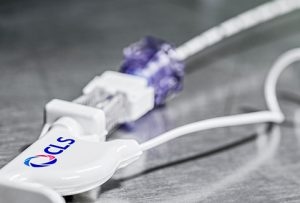 Lund-based Clinical Laserthermia Systems (CLS) and Toronto’s Exact Imaging, who estimate the total addressable market for such procedures at 500,000 per year, have signed a memorandum of understanding to market and sell a laser system guided by high-resolution ultrasound imaging.

“The goal is to offer the urologic market a superior solution for image-guided focal therapy in patients with localized prostate cancer and BPH,” announced the two firms.

Laser immunotherapy
CLS already sells its “TRANBERG” mobile laser unit, which is based around a 1064 nm wavelength fiber laser source producing up to 25 W power, for thermal ablation of tumors as part of a new immunotherapy approach to cancer treatment.

“Tumor thermal ablation with lower, non-coagulating temperatures at the surface of the tumor allows intact tumor antigens to be released and to stimulate a tumor-specific systemic immune response,” states CLS in its marketing material describing the TRANBERG system.

It adds: “There is data from pre-clinical and clinical studies suggesting that immunostimulating interstitial laser thermotherapy, in addition to local ablation, also evokes an immune-mediated abscopal [i.e. a therapeutic effect on metastatic tumors as well as the one being treated directly] anti-tumor effect as a result of its specific properties.”

According to the Swedish firm the laser-generated heat induces destruction of the targeted tumor. By careful control of the treatment by tissue temperature feedback, “optimal non-coagulating” temperatures can then be maintained at the tumor border.

CLS’s US-based subsidiary has recently embarked on a clinical study of the TRANBERG system on 25 patients at Toronto General Hospital. The two-year effort – which instead utilizes MRI image guiding - will evaluate the safety and effectiveness of the approach on men with early-stage prostate cancer who have not yet received radiation or hormone therapy.

Other trials of the technology currently recruiting include treatment of five breast cancer patients at Nottingham University Hospital in the UK, of advanced pancreatic cancer at four sites across Europe, and a skin cancer trial in Stockholm. All of those trials involve small numbers of patients, indicating the relatively early stage of the technique’s application.

29 MHz advantage
CEO Lars-Erik Eriksson said at the outset of the Toronto trial in April: “The study will produce important data surrounding the performance and efficacy of the TRANBERG Thermal Therapy System for MRI-guided focal laser ablation treatments.”

Exact Imaging claims to be the world-leader in high-resolution “micro-ultrasound” systems, which can perform real-time imaging and biopsy guidance for the prostate. Its “ExactVu” platform is used primarily for image guidance during targeted prostate biopsy procedures.

Per their memorandum, the two firms are aiming to enter into a commercial collaboration sometime this year, to market and sell a jointly optimized product for micro-ultrasound-guided focus laser ablation (FLA) treatment of the prostate.

Dan Mogren, chief commercial officer at CLS, said of the agreement with Exact Imaging: “The intended collaboration will strengthen both companies’ product offerings, expand the addressable market and further increase focus on sales.

“Ultrasound equipment is available today at almost all hospitals. However, we believe the 29 MHz ExactVu system, Exact Imaging's micro-ultrasound platform, dramatically increases the user's ability to see diseased tissue, to correctly place CLS instruments, and most importantly, to better monitor the FLA treatment itself. The intention is to offer the urologic market the safest, most complete and cost-effective solution for focal therapy of prostate cancer and BPH.”