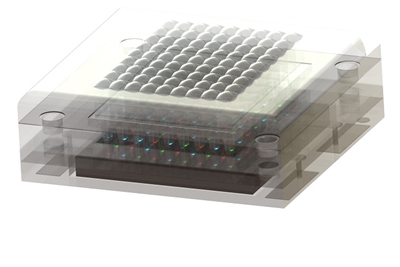 Under the deal, Plessey will provide its “Quanta-Brite” family of microLEDs, which are said to deliver very high efficiency and an improvement in lumen output compared with other light sources currently available.

Scaling up
Rochester-based Vuzix, which has been working on smart glasses for two decades and is also engaged with the likes of Toshiba and Qualcomm, is working to develop and scale production of its new “Blade” smart display for AR and mixed reality (MR) glasses.

Formed from precision nanostructured glass, the waveguide at the heart of those glasses is said to be a key component, enabling users to see high-resolution computer-generated graphics and information superimposed over images from the physical or real world.

“The resulting optical system is up to 50 per cent smaller, lighter, simpler and cheaper than incumbent solutions,” states the UK company, adding that the combination with minimal optical system losses results in significantly better overall power efficiency.

“Size, weight and power reduction are key considerations in AR/MR wearables,” added the firm. “Quanta-Brite has been designed specifically for the next generation of Vuzix personal display systems.”

Major enabler
Vuzix president and CEO Paul Travers described the microLED technology as potentially a “major enabler” of the future of augmented reality. He said that as well as delivering high-efficiency, low-power and small-size illumination capabilities, the very high level of luminescence delivered would lead to sleeker form factors, seen widely as a critical requirement for mass-market adoption of AR/VR/MR glasses.

Keith Strickland, Plessey’s CTO, claims that the firm’s monolithic microLED technology is emerging as the only approach that is able to provide high luminance combined with the very small form factor and minimal energy consumption seen as necessary for more widespread commercial penetration.

According to The Consumer Technology Association (CTA), the US organization that hosts the agenda-setting CES event in Las Vegas every January, the US market for headsets and eyewear in AR/VR applications is set to hit a record $1.2 billion this year.

Given the number of major players in the market – the likes of Microsoft, Facebook-owned Oculus Research, Google, Nvidia, Huawei and others were all represented at SPIE’s recent AR/VR/MR design challenge event held in Strasbourg, France – there is clearly the expectation of a much larger market emerging in the near future. Another of the Silicon Valley giants, Intel, acquired a 30 per cent stake in Vuzix back in 2015.

However, there are still a number of technical challenges – many related to the optics of such glasses and headsets – that must be overcome to achieve the desired combination of compact, lightweight hardware and smooth, high-fidelity, and high-resolution image reproduction are met.

Optics challenges
According to Bernard Kress, chief optical architect at Microsoft’s Hololens AR/VR/MR division, some of the hot-button technical topics include solving issues related to “vergence accommodation conflict” (the relative movements of a user’s pupils), pixel occlusion, and optical foveation (the variation in image resolution across the field of view).

Last month Vuzix, so far a much smaller player in the AR/VR/MR sector than the Silicon Valley big-hitters, described industry interest and response to the Vuzix Blade as “very strong”, but posted an operating loss of $5.4 million on sales of only $1.5 million in the opening quarter of the year.

However, Travers told investors that volume shipments of AR glasses for Toshiba would “increase significantly” in the near term, while mass production of the Blade would follow soon, as pilot programs moved to “multi-site rollouts”.