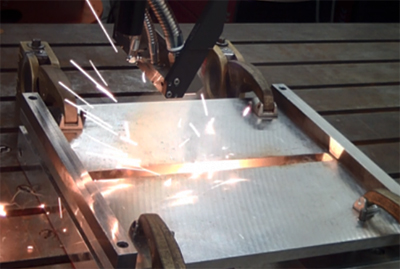 Load-adapted and lightweight components made from steel-aluminum mixed joints will be required for the automotive industry of the future. As part of the LaserLeichter project, Laser Zentrum Hannover, (LZH), has just announced the development of a new laser welding process for rapid and safe joining of three-dimensional structures made of steel and aluminum.

Such robust and lightweight steel-aluminum composite parts are ideal for reducing vehicle weight and can therefore help reducing pollutant emissions. In order to optimize the joining of mixed and problematic compounds for series production, LZH scientists developed processes for joining two- and three-sheet metal joints with high welding speeds of up to seven meters per minute.

The basis for the remote laser beam welding process is a 3D scanner optic, newly developed by Trumpf Laser. The LZH teams says that now “complex three-dimensional seam geometries are possible even with large structures.” So, the process is applicable to car body construction and can replace complex robot movements, say the LZH development team.

The weld joint achieves a shear tensile strength of approximately 67 percent of that of the aluminum alloy. Due to the parallel arrangement of three welds, this can even be increased to about 95 percent, says the LZH team.

The process was originally developed for battery cases of electric cars, seat structures and car body parts. The Volkswagen AG has quasi-statically and dynamically tested the validation components for car body applications. The joined mixed compounds have an advantageous crash behavior, since the joining partners remain safely connected. 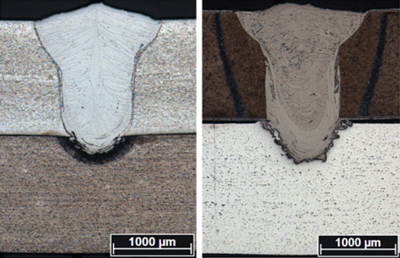 One of the challenges in welding steel and aluminum is to avoid hard and brittle intermetallic phases in the welding seam, which cannot be completely avoided. During laser welding, a low amount of heat is introduced into the workpiece in a precisely-targeted manner. Therefore, these phases are formed to a reduced extent and the dissimilar materials are melted as defined. Thus, it is possible to control the mixing of the joint.

The LaserLeichter project, which commenced in 2015, was funded by Germany’s Federal Ministry of Education and Research (BMBF) within the scope of the funding initiative “Photonic Processes and Tools for Resource-Efficient Lightweight Construction“. The consortium was coordinated by the LZH.

The kind of solid-state lasers that Trumpf presented at this week's LASYS exhibition are finding favor in an increasing number of industrial applications. There are three key reasons for this: simplified integration of the beam guidance system via laser light cables, flexible beam division or deflection in the Trumpf Laser Network, and ongoing development of the TLN itself. Trumpf is already developing hollow waveguides as a future form of laser light cable for ultrashort pulsed lasers.

Rapid progress is also being made in beam shaping systems for solid-state lasers. For example, TruDisk lasers now come with BrightLine Weld, a new feature that enables flexible distribution of the laser output between the inner and outer fiber core of the laser light cable. This produces different laser beams in the two cores.

The system then positions one beam on top of the other on the workpiece, synchronizing the beams to create the best results for each particular process. This approach offers some major quality improvements and helps boost productivity. The patented BrightLine Weld technology can even be retrofitted to most existing laser installations and can be applied to multiple laser outputs from a single beam source.