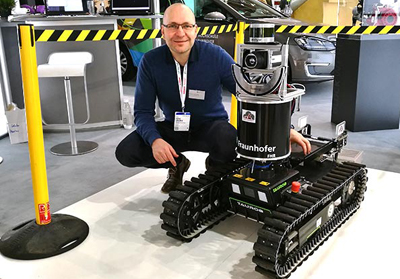 Achim Lilienthal with his SmokeBot.

A robot that can both see and navigate in smoke-filled areas, as well as discover gas leaks and plot maps of areas it has been in – this is the result of the EU-funded research project SmokeBot, led by Örebro researcher Achim Lilienthal.

The SmokeBot is a new sort of robotic device developed to assist fire services and rescue units in deployments under critical conditions. It collects data about accident and disasters situations with extremely limited visibility, effectively improving the safety of rescue operations.

"This robot is equipped with gas sensors, radar, a laser scanner and thermal camera. At present, there is no robot with this combination of features," said Achim Lilienthal, project coordinator and Professor of Computer Science at Örebro University.

SmokeBot has been developed in close cooperation with rescue units in Dortmund, Germany. The goal has been a robot that is adapted to rescue personnel's needs during risky missions. It can plot maps of smoke or dust filled areas, providing a valuable picture of an area where humans are unable to see.

"Restricted visibility is particularly critical for our rescue units and affects our perception capacity. In such blinding situations the SmokeBot can function as our eyes and lead us in search and rescue operations," commented Sylvia Pratzler-Wanczura, Principal Engineer at the Institute of Fire Service and Rescue Technology, in Dortmund, Germany.

The robot is also equipped with gas sensors which not only can detect different gases, but also provides information about the amount and concentration of gases."It compiles information from different sensors and can assess, depending on temperature and occurrence of a particular gas, if there is a risk of a gas explosion," explained Lilienthal.

The smoke-seeing robot is remote-controlled by rescue personnel and navigates itself if necessary. The ability to connect itself to the Internet means that the robot will not lose contact with its operator.

"Should it lose contact with rescue personnel, which can happen, the robot remembers where it last had an Internet connection and can navigate back to that location," added Lilienthal.

Sylvia Pratzler-Wanczura believes that in the future the SmokeBot can become a regular part of rescue services’ range of aids and support systems. A similar robot, though only equipped with a robot arm and camera, is already being used by rescue services in Vienna, Austria.

"Most definitely. It is a considerable advantage in situations where it is too risky to send in rescue personnel or when we need to search through large areas as is the case with floods and forest fires," she commented.

Currently, it takes about 15–30 minutes for the robot to collect data on the accident location, which means that it cannot yet be used in the most urgent of rescue efforts.

"In these time-critical situations, it's far too time-consuming. If we have to search for injured persons in a burning building and visibility is zero, then we have precious little time for a rescue operation. We can't allow for a robot to search the building first," explained Sylvia Pratzler-Wanczura.

Researchers have primarily developed SmokeBot for use in a variety of rescue operations, but its many functions may open the door for both new areas of application and further development of its various sensors.

"Another potential area where the robot could be of benefit is in agriculture. Here there is already a demand for robots that can see through dust. Gas sensors may also be used for measuring different kinds of gas emissions," concluded Lilienthal.