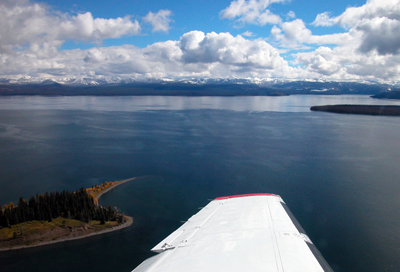 Over and trout: View from the aircraft scanning Yellowstone Lake for invasive fish.

An aircraft-mounted lidar-based instrument offers a faster way for the US National Park Service (NPS) to locate and capture non-native fish threatening indigenous species in lakes. For decades, the NPS has been battling against lake trout, an invasive fish with a voracious appetite that has overtaken Yellowstone Lake's indigenous species, especially the cutthroat trout.

The instrument, which uses a green laser lidar, could allow those who manage the lake to hunt for invasive fish across a wider area at lower cost, making more efficient use of the approximately $2 million spent on lake trout control each year.

In Applied Optics the researchers report on a series of test flights that have been successful in locating groups of lake trout and identifying previously unknown spawning areas. They demonstrate the technique's ability to find groups of at least two lake trout swimming as deep as 15m below the surface.

Researcher Joseph A Shaw, of Montana State University, commented, "The key problem we address with this research is the need for a method to find where the invasive lake trout spawn so fisheries biologists can deploy various methods of reducing their population. There are several other methods being explored for tracking these fish, including acoustic sensing, but an airplane can cover the large lake in a much shorter time than is possible for boats."

Lidar has previously been used to track fish in marine ecosystems, but this is the first time it has been used to study fish in lakes, where the water is cloudier. In addition, while other lidar applications require expensive, sophisticated equipment, Montana State University engineers developed the new instrument for less than $100,000 and optimized it for operation on a single-engine airplane that can be flown for $500 per day, making it a practical and affordable solution for ecologists and local fishery and water resource managers. 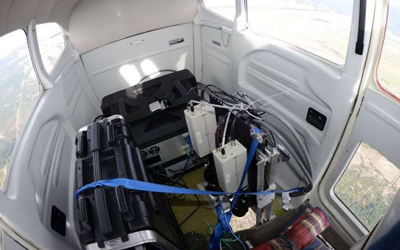 Nowhere to hide: The LiDAR sends a green beam down and back from the plane.

"The relatively low-cost and small size of our lidar system will make it useful for other types of ecological studies, such as mapping plankton layers and plumes from underwater vents," said Shaw. "Remote lakes that would be difficult to access from the ground can now be easily mapped and studied within the span of a single day."

The introduction of non-native lake trout to Yellowstone Lake in the 1990s dramatically disrupted the area's intricate ecological balance. Lake trout prey upon the lake's native cutthroat trout, which have historically been a key food source for many top predators. As lake trout populations spiked, the cutthroat trout population collapsed, dropping by 90 percent between 2000 and 2005, after which the Montana project commenced.

To locate the lake trout, for culling, biologists have hitherto implanted individual fish with acoustic transmitters and tracked them with receivers, a time-consuming and labor-intensive process that offers only incomplete coverage of the invasive fish's whereabouts.

The research team aimed to develop a more effective way to rapidly locate large groups of lake trout without tagging. Their solution, a LiDAR instrument fitted to a small aircraft, allows them to detect fish in a 5-meter swath of water and cover 80 kmh.

The device transmits a short pulse of laser light from the airplane through the air and into the water. The lidar receiver measures back-scattered light, allowing researchers to pick out fish from the surrounding water. 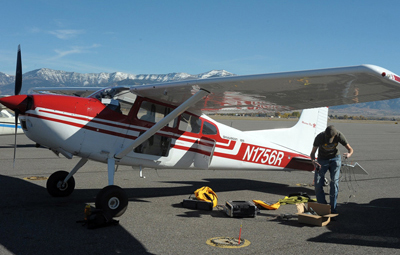 Right angle: setting up the LiDAR in the plane for a flight over Yellowstone Lake.

To optimize the setup for use on the lake, the researchers used a green laser, which penetrates water better than other types of lasers used for lidar applications on the ground. The beam was angled backward so that the light's reflection on the water is deflected away and does not saturate the receiver.

Tests of the later setup, in 2015 and 2016, successfully identified numerous trout groupings. Shaw says that the system could be further improved with a technique called push-broom scanning, in which the laser beam is scanned in a line to cover a wider swath. This would allow scanning the full lake area more quickly than the single fixed-angle laser used in the current setup.

The researchers also aim to develop additional tools to help users rapidly translate lidar-generated data into actionable information, and to adapt the system for other types of freshwater ecosystems.

"We are interested in developing automated fish-detection algorithms and in using this method as a routine tool to help the fisheries biologists in their battle against invasive lake trout," said Shaw. "We also are exploring options for using this lidar, along with multispectral and hyperspectral imaging systems, to monitor river health."