7.4-ton payload of research equipment, cargo and supplies due to arrive at the ISS May 24. 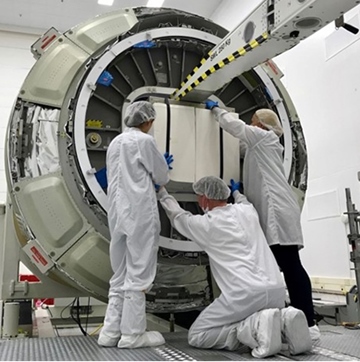 A laser system for ultra-cold-atom research is part of a new scientific payload currently making its way to the International Space Station, and due to arrive May 24.

Launched from NASA’s Wallops Flight Facility on board an Orbital ATK Cygnus spacecraft earlier this week, the Cold Atom Laboratory (CAL) equipment was developed by a dedicated team at the space agency’s Jet Propulsion Laboratory in California, and is based around commercial laser equipment.

To take delivery of the payload, ISS astronauts Scott Tingle and Ricky Arnold will use the space station's robotic arm to capture Cygnus when it arrives, with live coverage of the rendezvous available on the NASA website early on May 24. Installation coverage is scheduled to begin at 7:30 am EDT.

A similar sensor payload, built by a German consortium, launched from northern Sweden last year as part of the matter-wave interferometry under microgravity (MAIUS) mission - and represented the first quantum optical sensor payload to reach orbit.

Once up and running, the kit will enable research in a temperature regime and force-free environment that is impossible to replicate on Earth. “In the microgravity environment, observation times over 10 seconds and temperatures below 100 pK are achievable, unlocking the potential to observe new quantum phenomena,” explains the CAL team on its web site.

The CAL facility is also designed for use by multiple scientific investigators, and to be upgraded - including with new lasers - and maintained while on orbit, adds the JPL research group. “CAL will also be a pathfinder experiment for future quantum sensors based on laser-cooled atoms enabling exquisitely precise measurements of a wide variety of phenomena,” they say.

“In the realm of modern physics, the new Cold Atom Lab on Cygnus could help answer some big questions,” announced NASA in its release following the launch. “CAL creates a temperature 10 billion times colder than the vacuum of space, then uses lasers and magnetic forces to slow down atoms until they are almost motionless.”

It is hoped that the longer observation times possible in microgravity could lead to a number of improved technologies - including sensors, quantum computers, and atomic clocks used in spacecraft navigation.

Off-the-shelf kit
According to JPL, the CAL instrument utilizes plenty of commercial off the shelf (COTS) hardware and software – something that has enabled rapid development since the project got the go-ahead.

The laser assembly features fiber-optic coupled lasers to simplify the overall opto-mechanical design, with fan cooling and a shield to attenuate the Earth’s magnetic field, which varies over the course of the ISS's orbit.

Mission objectives for the setup on board ISS include studying the properties of quantum gases made up from rubidium and potassium isotopes loaded into optical lattices.

Additional features of the CAL system include the ability to image samples at high resolution through a window in the optical chip, while separate, wide field-of-view imaging is also available.

The “atom chip” utilized in the system is based on a compound silicon/glass substrate material that enables both magnetic and optical control of ultra-cold atoms, with on-window wires for simultaneous magnetic trapping and optical manipulation.