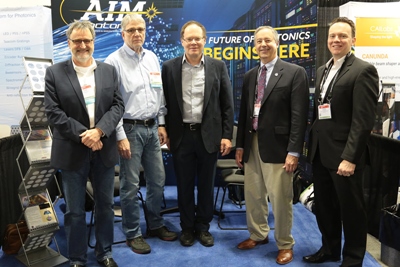 by Ford Burkhart
A genuine historic moment for US photonics is just a few weeks away. With tool installation now under way, a formal launch of the cutting-edge $612 million AIM Photonics core laboratories is expected in September, officials say.

And although that is a bit behind original schedules, leaders are voicing sky-high expectations.

“This can be a game-changer for many in the industry,” said Michael Liehr, the AIM Photonics CEO. The hub lists 13 “Tier 1” members, including major industry players IBM, Cadence, Mentor, Infinera, and Cisco, among a total 89 members.

“Because of our multi-project wafer (MPW) capability, small and medium-sized companies can afford access to this capability since they don’t need to purchase an entire project wafer,” Liehr said.

TAP facility build-out
The hub’s toolset will open doors to photonic integrated-circuit (PIC) development and commercialization, alongside testing and packaging for what Liehr described as “top-tier small and large industry partners”.

It will also become the world’s only open foundry capable of producing PIC devices on a state-of-the-art 300 mm diameter silicon wafer platform. It offers a process design kit (PDK) that will allow multiple types of PIC device to be fabricated on a single MPW – massively reducing production costs as a result.

The resulting silicon photonics devices and PICs are expected to boost operating speed, reduce energy consumption, and decrease size in a wide range of applications - from internet connections to biological and chemical sensors, and autonomous vehicles.

Critical to the AIM Photonics development is the PIC test, assembly and packaging (TAP) facility, currently being fitted out at the Eastman Business Park in Rochester. This is where the 300 mm wafers will be converted into chips, characterized and packaged in volume.

Installation of $40 million worth of high-tech processing, test, and metrology tools is just under way inside the 30,000 square-foot TAP facility’s state-of-the-art cleanrooms.

The TAP is the heart of the hub, formally known as the American Institute for Manufacturing Integrated Photonics, and exists inside labs and cleanrooms leased from chip giant ON Semiconductor.

Building 81
Its labs fill the fourth and fifth floors of the legendary Building 81, where optical sensor research regularly made headlines in the heyday of Eastman Kodak and the 1200-acre Eastman Business Park, formerly known as Kodak Park.

With offices and conference rooms now largely completed, and the TAP cleanrooms said to deep in the “mid-buildout” stage, CEO Liehr said the foundry was pleased to see work “moving from the fit-out of the facility to the tool installation phase.”

An earlier goal envisaged opening the labs by July 2017, later pushed back to a target of mid-2018 for starting PIC production at the TAP site.

AIM Photonics is a public-private initiative, with the public element including a significant sum provided by the US Department of Defense. Back in summer 2015, the former US vice president Joe Biden topped the bill when upstate New York was revealed as the winning bidder for the project.

The initiative has four major goals: reducing energy consumption in data centers by supporting the replacement of copper wires with optical links; providing photonics technology for forthcoming 5G wireless networks; helping develop lidar for applications in self-driving vehicles; and, in partnership with the University of Rochester, developing optical sensors for medical and environmental applications.

User interest
Ed White, the corporate outreach executive for AIM Photonics, recalled that during a spring meeting held at Massachusetts Institute of Technology, a number of delegates wanted to learn more about how they could make use of AIM’s facilities. That was followed by a call for proposals meeting in Washington, DC.

“The interest is definitely encouraging,” White said. “What we’re doing now is trying to understand the customer’s timetable so that we focus on the tools our customers need and ensure that they are the first tools into the facility.” White, also associate VP for test, assembly, and packaging at AIM, added that having the right tools for customers is of paramount importance for AIM Photonics:

“As AIM engages customers and understands their requirements, [the foundry] plans to add to the toolset, to better enable the institute to meet customer needs.”

The goal, White said, is to create the first national PIC “ecosystem” - with the capacity to manufacture, package, and test cutting-edge devices fabricated on 300 mm-diameter silicon wafers.